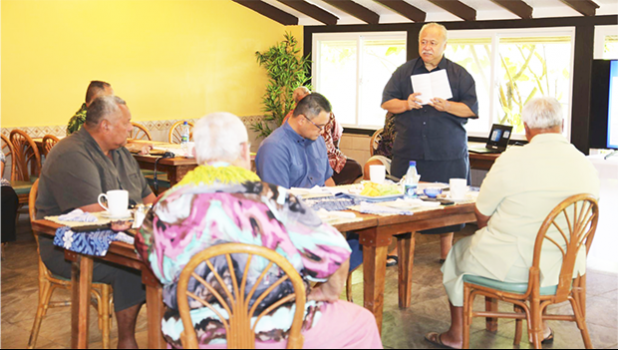 In a press release from the Governor’s Office, Gov Lemanu Peleti Mauga provided details on the meeting that also included Director of the Office of Political Status, Constitutional Review, and Federal Relations, Dr. Tapa'au Dan Aga, who presented strategies and programs leading up to the Constitutional Convention.

The theme for this year's convention is, "O lou Tofi, lou Fa'asinomaga ma lou Fa'avae [It is your Heritage, your Identity and your Foundation ]."

The Office of Political Status, Constitutional Review, and Federal Relations will compile a curriculum guide for the convetion.

One proposed program is a student-led Constitutional Convention with the Department of Education that is tentatively scheduled for April 2022. Students will experience how important it is to understand the American Samoa Constitution and the current Political Status in detail.

The governor emphasized the importance of grasping the interest of the youth as they will become the next leaders of our Territory. "We need to reach out to the youth; get them engaged so when it is their turn to be leaders of American Samoa, they will be better than us. That is the ultimate goal. The journey that our forefathers had experienced was not an easy one, but it was the first step in our progress towards establishing our Government," he said.

House Speaker Savali Talavou Ale expressed how impressed he was to see the strong partnership between the Administration and the Fono early on. This harmonious relationship will bring this event to fruition. "The last Constitutional Convention took place in 2010, so as we prepare for this year's convention, it is important to work together for the betterment of our people.", stated Representative Ale.

The Office of Political Status, Constitutional Review, and Federal Relations and the Constitution Review Committee will begin the work at the end of January, 2022.