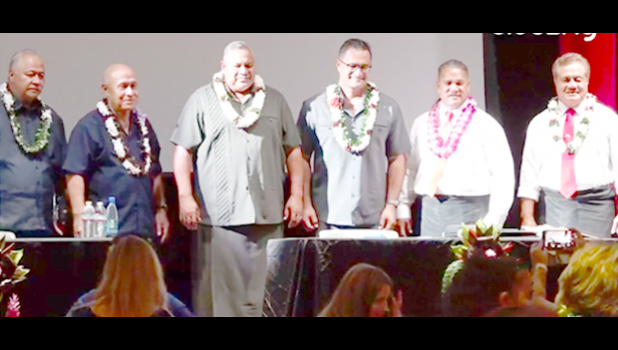 Pago Pago, AMERICAN SAMOA — New taxes or increases in current taxes to provide additional revenue for the government has come up every gubernatorial election year and it has surfaced this year, during the second forum hosted by the American Samoa Bar Association earlier this month at the American Samoa Community College Multipurpose Center.

“You have expressed in your platforms numerous changes that will necessarily increase government costs. Should the amount of taxes we pay be increased to raise the required revenue?” was one of the questions the public asked of the gubernatorial teams.

The Gaoteote and Fa’ivae team had a prior commitment and was unable to attend the forum.

Candidate for governor, Lt. Gov. Lemanu Palepoi Sialega Mauga responded that taxes are becoming a “major issue” during this campaign.

To him and his running mate, candidate for lieutenant governor Talauega Eleasalo Va’alele Ae, “this is one key area of the government that has to be looked at, real seriously,” said Lemanu.

“But we can take a look at taxes seriously, look at what we don’t really need and try to minimize those taxes — business tax, employment tax. And taxes need to be fair across the board,” he said and cited the 2% wage tax, which is only paid by workers with earned income.

“We are looking seriously at other kinds of taxes that will bring in revenue doing the same thing that is fair across the board and yet lower than what we have right now,” he said, noting that business people have questioned the many taxes imposed on them.

Candidate for governor I’aulualo Fa’afetai Talia responded that it’s “important that we develop the economy, it’s the only source of new revenue stream to the government.”

He pointed out that “we never made a pledge in our platform that we’re going to build a hospital, or build this, without coming up with a solution. That’s why we know, in order to improve and provide quality care, we have to have another revenue stream to build that.”

“I’aulualo and Tapaau pledge that we’ll never impose any tax. No tax because we’re overtaxed right now,” he said.

“If elected, no more taxes,” was the pledge from candidate for governor, Sen. Nuanuaolefeagaiga Saoluaga Nua, who claimed that the government currently is unable to collect the more than $100 million in money that’s owed to ASG.

For example, he claimed that LBJ has more than $10 million in outstanding receivables not collected. Another example is the Development Bank of American Samoa (DBAS), with $4 million in debts that could not be collected.

The candidate, who is the DBAS board chairman, didn’t specify as to whether these were unpaid loans to the government, the bank is unable to collect.

He blamed “our government leader”, saying in Samoan — ta’ita’i o le malo — as the reason all these outstanding revenues are not collected providing additional money for the government.

“If elected, Nua and Satele will build a new hospital” he said twice, adding that with a new hospital, patients will no longer need to be sent off island for treatment.