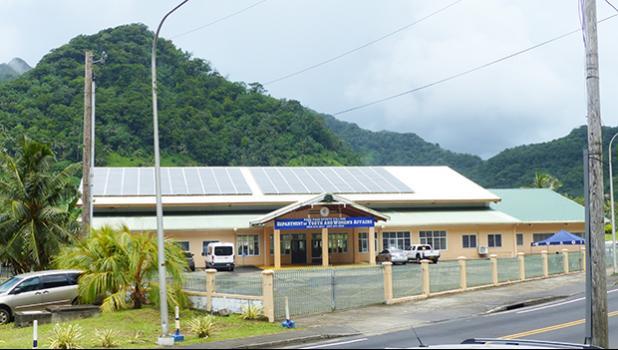 Pago Pago, AMERICAN SAMOA — With the government re-opening all of the doors at the Department of Youth and Women’s Affairs (DYWA) building in Pago Pago, used as a quarantine site for repatriated local residents from Samoa, local resident Bryan Jackson says he will not move forward with legal action against the Health Department.

Jackson had threatened to take DoH to court over an allegation of violations of “safety codes” and “human rights” of travelers quarantine at DYWA, after an individual housed at that facility informed him Tuesday that “all of the doors but one were nailed shut, and the only way in and out of the building” is through the front door entrance.  (See Samoa News edition last Friday for details.)

Jackson said last Friday afternoon that he had since been informed by the same individual quarantined at DYWA, that all doors have “been re-opened” since late Thursday afternoon.

“This means I will not be filing a petition with the Court regarding this issue as long as the doors remain open, that is,” he said.

Asked if Health director Motusa Tuileama Nua responded to his email letter seeking an explanation on this matter, Jackson replied, “I never got any kind of response from anyone in ASG, including” the health director.

All repatriated travelers from Samoa are required to quarantine for 14-daya as well as being tested. Besides DYWA, travelers are also now housed at Sadie’s by the Sea — since last week, during the second phase of repatriation.

Jackson filed the first, of the two lawsuits pending in the High Court against the governor and ASG over the alleged violation of civil and constitutional rights stemming from the governor’s COVID-19 declarations.

Jackson said Friday that he is keeping a close watch on similar lawsuits filed in Hawai’i, Oregon, California, and other states as well, saying that these are states where there actually is COVID-19.

State court judges in California and Oregon blocked many provisions of emergency orders issued by the governors of the two states, according to media reports.

For Hawaii, the case was filed with the federal court in Honolulu by a group of people living in Hawaii, California and Nevada challenging Gov. David Ige’s 14-day required quarantine of all travelers arriving in the state in an attempt to protect against the spread of COVID-19.

The quarantine requirement also applies to travelers who reside in Hawaii.

Last week Tuesday, the US Justice Department filed a statement of support for the lawsuit, arguing that the quarantine requirement discriminates against out-of-state travelers. (See Samoa News last Thursday for details.)

However, a federal judge issued an order last Wednesday saying that the court will “disregard” the USDOJ’s statement, according to The Associated Press, which also reported that plaintiffs — in a similar but separate lawsuit filed with the Honolulu federal court — dropped their case.

Also last Wednesday, Ige announced that starting Aug. 1st, travelers arriving in Hawaii would be able to bypass quarantine if they test negative for the deadly virus.

As of Saturday afternoon (12noon June 27th), Hawaii health authorities reported six new confirmed cases bringing the state’s total to 872 and the death increase from seventeen — since two months ago —  to eighteen, according to the state’s online public records.

While Hawai’i’s number of confirmed cases continue to spike, there are renewed calls by local and off island American Samoans and their families as well as others urging Gov. Lolo Matalasi Moliga to re-open flights between Honolulu and Pago Pago.

Flights, which have been suspended since late March, are scheduled to resume Aug. 1st.

American Samoa is the only US jurisdiction — state or territory — without a confirmed case and this has precipitated calls for the governor to allow the resumption of Hawaiian Airlines flights. Lolo has continued to resist such calls, as he is seriously concerned over the increase of cases in Hawaii.