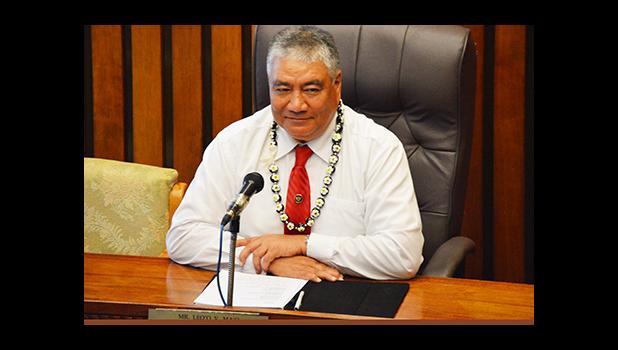 The Fono has officially confirmed Robert Ho Chee for a four-year-term as the first Commissioner of the Office of Financial Institution. The OFI’s initial operation expenses will be funded with proceeds from bonds issued by the American Samoa Economic Development Authority (ASEDA).

Ho Chee was unanimously confirmed by the House on Monday in a 15-0 vote and the Senate handed down their endorsement yesterday morning — also in a unanimous 15-0 vote — following a Senate Budget and Appropriations Committee confirmation hearing, where senators praised the nominee for returning home to serve the community, and noted that the nominee is well qualified for the post.

Senators recommended for Ho Chee to be honest at all times in carrying out the duties of the ASG regulator, because that is very important and to always remember to love the people of American Samoa during his tenure. Ho Chee responded that he would take all their advice and recommendations to heart.

He prayed for the well-being of all senators so they can “continue to provide the wisdom, the courage, and above all the knowledge to pass on to people, like myself” and to continue to work on what American Samoa was founded upon — “Put God First”.

Funding for OFI, the ASG regulator for local banking, money transfer and the loan service industries, was first raised during the House confirmation hearing with Rep. Larry Sanitoa asking as to how many employees will be hired for OFI and how the office will be funded, especially for the fact that OFI is part of the Treasury Department and no money has been allocated for the new office.

(The Treasury Department’s fiscal year 2017 budget document does not show any specific funds earmarked for OFI; and government witnesses told lawmakers last year that fees companies would pay for registration with OFI would cover expenses for this new office.)

Ho Chee said a “maximum of 10 people” will be hired for OFI and they include “bank analysts and some bank examiners.” As for funding, he said at least $1.5 million from the $15 million in bond proceeds for the establishment of the Territorial Bank of American Samoa would be used as initial funding for OFI during the first year or year-and-half.

Thereafter, he foresees a combination of local funds as well as those from OFI for future funding. Ho Chee also says there is funding available from the US that deals with protection of consumers.

The nominee said he always wanted to return home to serve the community via banking and hopes that been appointed to be commissioner, which is a very skilled position, will “benefit our little community.”

“I am a true Samoan, I have a gift from God and that gift is to provide the best financial service to my beloved country,” he concluded.