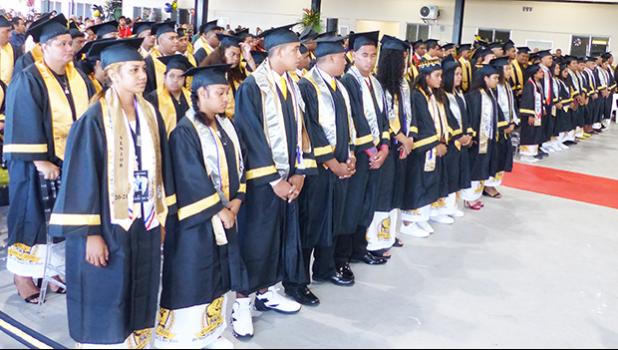 Pago Pago, AMERICAN SAMOA — The 79 graduates of the Nu’uuli Vocational Technical High School heard Monday's Commencement Speaker  Gov.Lemanu Peleti Palepoi Sialega Mauga speak of their ‘vision, passion and future’ that now lies before them as they graduate from a high school that continues to grow with its student body focusing on learning the trades, despite difficulties with supplies and at times even lacking adequate bathroom facilities for students on campus. (See more excerpts from his speech in a companion story in this issue.)

This year's graduation theme: is "Our Vision, Our Passion & Our Future." There were two Valedictorians and one Salutatorian.

Veronica is the senior class vice president, Miss Trade 2021, President of the 4-H Club, TSA reporter, and member of the HOSA club. She is the recipient of the Female Tradesmen of the Year Award and Female Scholar Athlete of the Year Award.

Rodney is born in Olympic, Washington in 2003.  He moved to American Samoa at six months old, He has been accepted to Missouri Southern State University and New Mexico Military Institute. He holds the chiefly title of Tuvaogaaletautootoo.