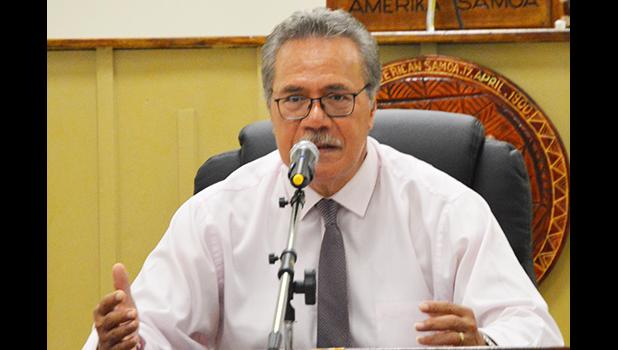 Pago Pago, AMERICAN SAMOA — Tackling the problem of illegal drugs entering the territory was one of the top issues discussed during the House confirmation hearing this week for Alfonso Pete Galea’i to serve as Homeland Security director.

Galea’i was passed by the House by a unanimous vote, while he was also confirmed by the Senate, yesterday morning.

Galea’i, who has been acting Homeland Security Director since the resignation of Samana Semo Veavea, was Director of the Office of Disaster Assistance and Petroleum Management for the last seven years.

Lolo noted that in that role Galea’i had been deeply involved with EOC operations and worked closely with the Department of Homeland Security. He also stated that his experience will be all the more valuable as American Samoa navigates the current emergency caused by COVID-19 pandemic.

Galea’i told the committee that he accepted the Governor’s appointment and he’s ready to serve the people of American Samoa. He said that he had worked for the cannery for over 20 years, before he switched to the government where he has served for over 26 years.

Representatives got right down to basics with comments on American Samoa’s drug pandemic.

Manu’a Representative Vesi Talalelei Fautanu Jr said that it’s been months since our borders were closed down due to the COVID-19 pandemic but the drug problem is still escalating. He said that our territory is still plagued with sales of illegal drugs on the street and everywhere.

“Almost everyday I read reports from our local media regarding heaps and heaps of drug cases entering our court. Despite our borders being closed, it seems like the drug problem is still increasing and your job is to find a way to stop it,” said Vesi.

One of the problems that the Homeland Security office has been facing for many years is funding to buy more resources to fight this drug problem.

“You need an airplane so that you can watch from above and find out who are these people involved in these operation. You also need a boat patrolling on the sea to secure the safety of all the cargo ships and fishing vessels entering our port,” the Manu’a Representative said.

Vesi told Galea’i that if the Fono approves him as director, he first task is to be on the frontline and his first priority is to safeguard this country. Vesi advised Galea’i that he needs to work together with the FBI and DEA to find ways to tackle the drugs problem that we face.

Galea’i thanked Vesi and the committee for words of encouragement, which gives him great motivation to do his job and to assist with the many challenges that lay ahead.

He said that he fully believes in his heart that leaders must work together to deal with the many challenges.

“The foundation that our ancestors had laid down for us is that we must live in a drug free community, and it’s our job as leaders of this country to make sure that we follow that platform.”

Galea’i said he believes the only way we can rid “our beautiful county” from the drug pandemic is for everyone to come together and work together, starting from families, villages and then the whole community.

He echoed Vesi’s concern regarding the many court cases involving drugs while our borders had been closed for almost 5 months now. Galea’i suggested that his office is working together with other law enforcement agencies in the country including the office of the FBI in Hawaii to confront and stop the drug supply from coming onto our shore.

He said that once the illegal distribution is stopped from off island, then their job will be easier to deal with those who are involved in the drug pandemic locally.

Several Representatives echoed Vesi’s statement and told Galea’i that his calling is from God and he needs to step up to help our people.

Tualauta faipule, Larry Sanitoa agreed that Galea’i has many challenges to face as Homeland Security director.

Sanitoa advised Galea’i to continue working together with other agencies under the Homeland Security office such as the OTICIDE (Office of Territorial and International Criminal Intelligence Drug Enforcement), along with the FBI (Federal Bureau of Investigation) and the DEA (Drug Enforcement Administration) in order to cure the drug pandemic in American Samoa.

“We really need to cut the supply then it will be easier for us to address other issues pertaining our own people dealing with drugs,” said Sanitoa.

Sanitoa reminded Galea’i of other challenges including the 2020 election, which is around the corner at the same time that there is a coronavirus pandemic.

Rep. Vailoata Amituana’i said that he doesn’t question the witness’s qualifications. He knows him very well and he is the right person for the post. He only asks him to look at the condition of the siren systems for disaster alerts. According to Vailoata, it’s been months since he has heard any siren tests on the first Friday of each month.

He told Galea’i that if the sirens are not working anymore his office needs to look at the maintenance to make sure to get them up again and running.

Rep. Gafatasi Afalava advised the new director appointee to look at the issue of too many people entering American Samoa every year, although he did not specifically identify which country or people he was referring to during his statement. He reminded Galea’i to do his job faithfully and remember that in his position, he has no family, sisters or brothers but to do the right thing for the benefit of everyone, not just a few.

Afalava recalled an incident that happened not long ago when a woman travelled from Samoa with an infant. The infant did not have proper travel document to enter the territory. Afalava, who is a member of the Immigration Board, stated that this type of problem should not happen.

Mitzie Jessop Ta’ase’s confirmation hearing for nomination as Attorney General is scheduled for Thursday at 8:30a.m.

The Senate passed the governor’s nomination for three members of the Territorial Bank of American Samoa (TBAS). Salaia Gabbard received a vote of 17-0 Iulogologo Pereira and Papalii Laulii Alofa each received votes of 16-1.