Honoring those who have died in war, and were lost at sea 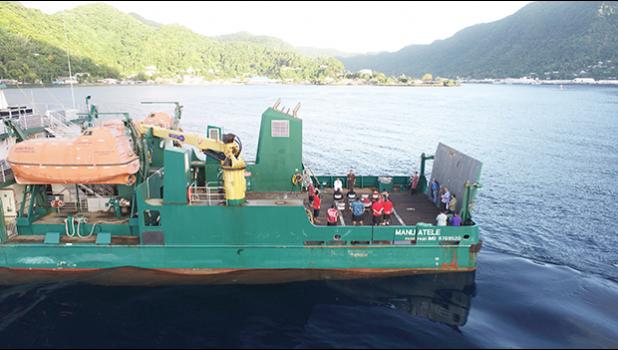 ... , and those buried here who could not return home
Source: Governor’s Office press release

Pago Pago, AMERICAN SAMOA — It was a solemn morning with the dawn breaking, and American Samoa was slowly waking up to celebrate Memorial Day yesterday; and it was a clear morning for the four wreath presentations planned by the Office of the Governor.

As Lt. Gov. Talauega Eleasalo Va’alele Ale disembarked the Territory upon the MV Manu'atele, at roughly 0645 Monday morning, simultaneously, Gov. Lemanu Peleti Mauga was ascending Blount's Point.  The wreath presentation by the Lt. Gov was in remembrance of those who were lost at sea. Likewise, Gov Lemanu's presentation was to pay homage to those who proudly served during the US Navy's Naval Station Tutuila stand up.  Specifically recalling the only time during World War II when American Samoa was under attack was on January 11, 1942, when a Japanese submarine shelled the territory.

Gov Lemanua continued with respective wreath presentations at the Satala Cemetery to remember Korean fishers and other foreigners laid to rest here in American Samoa. He also visited and laid a wreath at the Utulei Tramway on Mauga Alii, recognizing those who perished during the tragic plane crash in 1980.

The final wreath presentation concluded with a prayer service at the Veteran's Memorial Monument located in Tafuna Lion's Park.

The Monument provided a backdrop to the raising of the United States, American Samoa, all the branches of the military, and the POW flags.  The choir also sang the US National Anthem and the Amerika Samoa Anthems. In addition, the local high school Junior Reserve Officer Training Corps hoisted the flags.

During Gov Lemanu's memorial day special address, he said, "In the Arlington Cemetery there are over 400,000 tombstones of Veteran's who have passed.  Today you would see families and soldiers, marines, or sailors visiting and placing small US flags at the foot of every grave.  This job is not easy.  But we honor the service and sacrifices of those who have perished and do so willingly.  President Biden also had presented a wreath to the Tomb of the Unknown.  A grave that is honored and protected, every hour of every day, in the sun, rain, and snow."

"Today is a day that we honor and respect those who have made the ultimate sacrifice and to whom we owe a debt that we can never repay. We are honored to join in solemn remembrance of the long line of brave men and valiant women who have perished in giving their last full measure of devotion in support of freedom," stated Governor Lemanu in his Memorial Day message.

He continued, "Let us take time this Memorial Day to remember the fallen Toa o Samoa, whose dedication of duty is a true testament of selfless service.  As we honor their memory, let us continue to reflect on the unwavering commitment and patriotism of our fallen heroes, whose act of valor has allowed for our people to live entire lives basked in freedom. Finally, we extend our prayers for God's grace, strength, and comfort to the families who mourn the loss of these servicemen and women."

Gov Lemanu and Mapu Jamais, COL (RET), the Veteran's Affairs Office Director, delivered the wreath to the Monument's base.  The local US Army Reserve Unit performed a 21 gun salute and taps.