House hears the many obstacles to ‘bringing our people home” 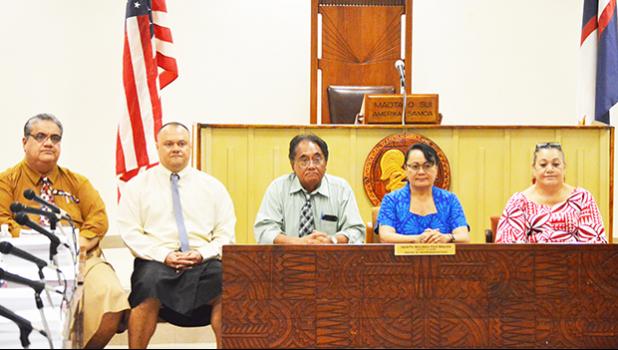 Pago Pago, AMERICAN SAMOA — The American Samoa Coronavirus Task Force is taking it one step at a time to find ways to bring local residents stranded in Hawaii and the mainland back home without facing any consequences afterwards from the coronavirus.

This was the statement by Dr. John Tufa, a member of the Task Force during a hearing with the House Health Committee this past Wednesday where they were called to update lawmakers on any plans the government may have in the event that there is a case of COVID-19 detected on island and also if there are plans for further charter flights.

The Chairman of the Task Force, Iulogologo Joseph Pereira was not present during the hearing. No explanation was given to the committee to explain why he was not present.

Faumuina told members of the committee that LBJ Hospital is ready to handle any positive case of coronavirus in American Samoa. They have enough rooms and beds for any patients tested positive, and they also have two extra containers standing by — if the morgue is full.

Jessop Taase said that Governor Lolo Moliga and members of the Task Force are working closely on finding ways to bring back home local residents stuck off island. She said that the governor does not sleep well at night because he has so many things on his mind — especially safeguarding our people from the coronavirus pandemic.

Dr. Tufa said that the Task Force chairman is the one to provide information regarding a second flight to bring home local residents who are stuck in Hawaii and the mainland. He said his job, along with Dr. Fuimaono is to put together all necessary information for the Task Force to help them make solid decisions for the betterment of our territory.

He said as the number of people testing positive with coronavirus in Hawaii and the mainland continues to increase, leaders are considering this very carefully while trying to find ways to answer the many calls from stranded local residents asking to return home.

He claimed that the Task Force is seeing a lot of media companies slowly moving their attention away from the coronavirus pandemic to make it seem like it’s not as much of a problem now. But, as they keep a close eye on the current situation in Hawaii, it is evident to them that the cases are quickly increasing.

While many of our local residents are stuck in Hawaii, Dr. Tufa said, Hawaii is moving back to “a stay home order”. “The best way to stop the virus from moving around is for people to stay home,” Dr. Tufa said. He also mentioned that Pacific Islanders have the highest COVID-19 death rate in Hawaii, and this has been reported in several Hawaii newspapers and media websites.

When asked what recommendations they have provided to the governor, Dr. Tufa stated that they recommended for the director of Department of Health, Motusa Tuileama Nua to carefully look at every option the Task Force can use to make sure the virus never enters the territory.

Dr. Tufa said they’re working with other Pacific islands such as Palau and CNMI who had started repatriating their citizen from Hawaii and they have several approaches to do it safely.

The difference, according to Dr. Tufa, is these Pacific islands only have 6-7 people at a time to repatriate, while the Task Force is looking at the possibility of bringing more than 60 to 100 people at a time.

“Right now, we have not really formulated a good plan to recommend to the Task Force Chairman for his approval but we’re still trying to figure out what is the best way for us to bring our people back home without bringing the virus along with them,” Dr. Tufa said.

One of the biggest challenges the Task Force is facing right now if they repatriate people from Hawaii is the testing. He told the committee that they’re trying to establish an agreement with the Diagnosis Lab services in Hawaii where they can have everyone get their test within a certain period of time and the tests are reviewed to make sure nobody who tests positive is transported back to American Samoa.

“If we do not test these individuals before they get on the plane, we’re introducing that risk of somebody with the virus infecting everybody else on the plane which is going to create even more problems when they arrive,” Dr. Tufa said, adding that this is the type of thing the Task Force is trying to finalize before they get to a plan for bringing local residents back home.

He said that the bottom line of everything is to bring our people back home and minimize that chance of bringing the virus to American Samoa.

Several members of the house committee wanted to know more about the testing plan for our people before they get onto the plane.

Dr. Tufa said the testing part is one of the big challenges because they’re not sure whether the tests for all can be completed at one time. He said the facility where the testing takes place in Hawaii can only handle a small number of people to be tested at one time.

He stated that they are still exploring every option one at a time before they submit their final recommendation to the Task Force chairman for approval.

The committee chairman replied that our people are suffering while stuck off island and they’re crying out to their family and leaders for help. Some of them do not have families with whom to stay, while others are having a hard time paying for the hotels where they’re staying.

“We haven’t checked with the Department of Social Services (DHSS) and their shelter about how many children they’re feeding right now because their parents are stuck off island. We haven’t asked the question how much money each person has spent since March when our border was closed. Our people want to come back home to be with their loved ones,” Vesi said.

He also stated that if the border continues to be closed, there will be a lot of people on the street with signs and everything else that the leaders don’t want to see.

“The people are accusing us for not doing anything and we get the blow from this everyday. We hear the unstoppable ringing of the phones, the unpleasant comments about us on social media,” Vesi said, adding that no one will become a hero until both sides are satisfied.

“How are we going to do this? That is our humble request to you the Task Force, please, please, do something to bring our people back home.”

Tagata Tu Faatasi Alliance of American Samoa presented a copy of a petition and supporting documents to the faipule, yesterday morning, supporting their plea to return home. (See separate story on petition.)