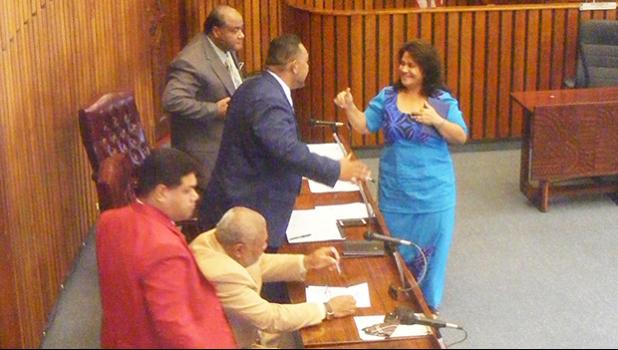 For welfare of education, she says, bring “everyone together and move forward from there”
By
Fili Sagapolutele
fili@samoanews.com

In a 17-1 vote, the House yesterday confirmed the governor’s appointment of Dr. Ruth Matagi-Tofiga as Education Department director. She will now await a final decision by the Senate, whose Education Committee has scheduled next week Monday for a confirmation hearing for the director-appointee followed by a vote.

Prior to the House vote, Matagi-Tofiga was before House Education Committee earlier in the day for her confirmation hearing, where she fielded several questions and received suggestions and recommendations from lawmakers on various issues to look at once she is fully confirmed by the Fono.

One question that has lingered in the Fono as well as from others in the community is why Matagi-Tofiga opted to take the directorship post for ASDOE and not re-apply for the post she held in the last four years — Department of Marine and Wildlife Resources director.

Several lawmakers, including House Vice Speaker Fetu Fetui Jr., raised the question.  Of note, two current faipule were students of Matagi-Tofiga when she was a teacher at the same high school, and later served as principal.

Fetui asked the question during the confirmation hearing, to which Matagi-Tofiga replied that to her, she is a just public servant and whereever the governor wants her to serve she will do so, with the help and guidance from God.

She reminded lawmakers that she started in government working at ASDOE, and she is thankful to the governor for selecting her to this important post as well as selecting her to serve as DMWR director in the last four years.

Fetui asked if she applied for the ASDOE director post and Matagi-Tofiga said, “yes, I certainly did.”

Responding to other questions from Fetui regarding the betterment of students education, the director-nominee said that she “believes in data” which is very important and it’s been reviewed right now and data can be used for the betterment of the ASDOE.

She is also looking at teachers, who are the “key” to educating students. “There’s a lot of factors that goes into the education of our children,” she said adding that since her appointment as acting director she has already conducted a visit to all public schools from Matatula on the Eastern side to Fagali’i on the Western end of Tutuila.

Other factors contributing to education are school principals and staffers at the main office. And during a recent meeting with staff, Matagi-Tofiga said she informed them that they couldn’t work in isolation but need to work together with everyone. “If we come together we can make a difference,” she told lawmakers.

When asked by the committee if she was going to continue the Dual Language program — using English and Samoan for classroom teaching that was initiated by former ASDOE director Vaitinasa Dr. Salu Hunkin-Finau, Matagi-Tofiga responded that this is part of the review of the data with ASDOE.

“We will assess the data, if it’s good, I will continue it,” she said and reminded lawmakers that this program was only implement two years ago. (The pilot program has been implemented in some elementary school since it’s inception.)

The committee also asked her for her short-term and long-term goals for ASDOE if confirmed by the Fono, to which Matagi-Tofiga said that for the short term, “address everything and anything” for the department. For example, funding issues — both local and federal monies.

For the long-term goal, look at teachers and to support them, as they are the “key” to educating students. Additionally, funding — including federal grants —  “must be available” to help address the challenges faced by the department going forward.

She reiterated to lawmakers that in order to achieve the goal of educating students, the “key is working together, bring everyone together and work together. There’s a lot of support system but we must work together to achieve our goal.”

A committee member asked her for her main objective for the welfare of the public school system and was asked to provide a short reply, to which Matagi-Tofiga said, “Bringing everyone together and move forward from there.”

Matagi-Tofiga said ASDOE oversees an enrollment of some 20,000 students from 22 elementary schools, six high schools and about 20 Early Childhood Education (ECE) centers. And that is a major task, she said, adding that “no one can do the job alone, I can’t do it alone without working together with everyone. I’m just a public servant.”

And when asked if she was ready for the job, she said, “yes!”

Some of the issues raised by committee members for Matagi-Tofiga to carefully review include utilizing the E-rate program to its full capacity, utilize educators including degree holders working in the office in the classroom, improve grades for graduates, fights during ASDOE sponsored sports program, and qualification of teachers.

A few times during the 90-minute hearing the House Education Committee chairman Vaetasi Tumolimoli Moliga reiterated to his colleagues that a confirmation hearing focuses on the qualifications and related issues of the nominee as a director, but all other issues regarding ASDOE can be raised at a later time, once the nominee is officially confirmed by the Fono.

During the hearing, a few senior ASDOE employees, Matagi-Tofiga’s family members and Rev. I. Ulu and his wife were in the House gallery for support.