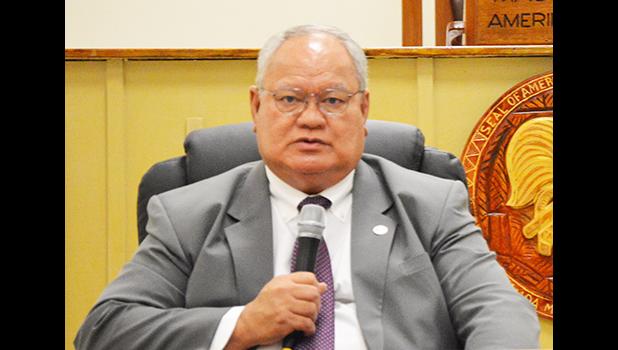 Pago Pago, AMERICAN SAMOA — Vice Speaker of the House, Rep. Fetu Fetui Jr told Police Commissioner Le’i Sonny Thompson during a Wednesday hearing that he should not be publicly involved in any election campaign.

When given the chance to express his opinion to the committee regarding this issue , Le’i stated that as a citizen of American Samoa, he has a right to be involved in any election campaign on his own time.

Le’i and Fire Chief, Cliff O’Brien appeared before the House Public Safety committee to discuss some of the issues that are concerning legislators. These issues included how to address the drug problem in the territory and the tragedy, which killed two firemen in April.

The hearing started with Fetui Jr questioning Lei’s involvement in an election campaign event a few weeks ago. Fetui Jr told Le’i that he and other faipule have different ways of interpreting the law, however, he wanted to make it clear that as a Police Commissioner, he should have not been involved in any election campaign.

“Your job as a Police Commissioner is to make fair decisions and protect the safety of the community. The community respects you, so you must also return the favor and respect the community,” said Fetui Jr, who is a former cop.

The Manu’a #1 Representative said that he’s concerned that Lei’s decision to publicly involve himself in an election campaign might influence other officers on the force. He advised the Police Commissioner to be careful of what he’s doing because not all individuals on the force support his gubernatorial team.

Le’i thanked the Vice Speaker for being honest and responded by saying that when he appeared before the Fono three years ago for his confirmation hearing as a Police Commissioner, he told both Senators and Representatives that he would serve the community 24 hours a day, 7 days a week.

However, his involvement in an election campaign is based on his rights as a voter and he’s doing it on his own time, not on the government’s working hours. He told the committee that his working hours are from 8a.m to 4p.m, but his service is 24/7.

Le’i further stated that he enforces the law and protects the safety of the community, but when it comes to the right to vote, he will never do anything to influence other people including his staff. He said that his staff has their own right to decide which gubernatorial team they want to support.

Fetui Jr said that he’s trying to remember if there was any Police Commissioner in the past that had involved himself publicly in an election campaign. He then thanked Lei and the whole department for the great work they had done for the community.

His only request to the Fire Chief was to provide a fire truck for Manu’a.

Rep. Vaetasi Tuumolimoli Saena Moliga asked the Police Commissioner for an update on police salaries and the issue of the drug problem in the territory.

Le’i said there were only 96 police officers on the force when he first came in the office. As of now, there are 138 officers working on the force and there have been three police academies. The fourth academy will commence on Aug. 2nd, 2020.

Fire Division is still short with only 37 firemen, while the Territorial Correctional Facility (TCF) has 60 correctional guards, divided into three different shifts.

One hundred trainee officers were hired under the COVID-19 Emergency Program, and they will stay on until Dec. 30, 2020, which is the last day of the program. These emergency hires are paid at the rate of $8 per hour.

DPS also received four new police units (vehicles) and four jet skies from COVID-19 Relief Funding. Based on the population, Le’i suggested to the committee that DPS needs 200 police officers to do the job properly.

DRUG PROBLEM IN THE TERRITORY

One of the top challenges cops are facing everyday while performing their duties is the drug problem in American Samoa, according to Lei’s statement to the House committee. He also said that officers are also arresting people for committing other crimes such as burglary, domestic violence, sexual abuse and child abuse.

Le’i told the committee that almost every day police discover illegal drugs, weapons, ammunition and paraphernalia inside vehicles that are pulled over during traffic stops. (Read SN Court Report any day of the week to verify this.)

The Police Commissioner make it clear that when it comes to the protection of our borders including the airport and the main wharf, cops are the second line dealing with cargo entering our shores with Customs being the main key when its comes to keeping drugs from entering our borders.

Manu’a #1 Representative, Vesi Talalelei Fautanu Jr told Le’i that it’s been 5 months since the borders have been closed due to the COVID-19 Declaration from the Governor, but it seems to him that the drug problem is still rising with the many people who are being arrested and charged with unlawfully possession of illegal drugs.

Vesi said he’s confused because he thought that drugs were coming through our borders but since our borders has been closed for many months and drugs are still circulating in the territory, he’s now trying to figure it out where drugs are coming from.

The Manu’a faipule expressed support to the commissioner and his staff for their never ending job to make sure American Samoa’s residents are living in a peaceful environment. His only advice to the commissioner was to look at those few cops who are not mindful when doing their job.

Vesi reminded the commissioner, “The most dangerous person on the road is a cop who doesn’t know how to do the job.”

Representative for Ofu, Olosega and Sili, Tiaoalii Fau Sai criticized the way police conducted a drug raid in his district last month. Tiaoalii told Le’i that he received angry feedback from members of his district regarding the way cops behaved. He told Le’i that he should carefully consider these types of police operations before they happen, because the raid was mainly focused on Ofu, and he (Le’i) is also from Ofu.

“That’s not how we do our job. We treat everyone the same and each person will be questioned accordingly,” Le’i told Tiaoalii.