How teams feel on Senators’ selection by cultural process 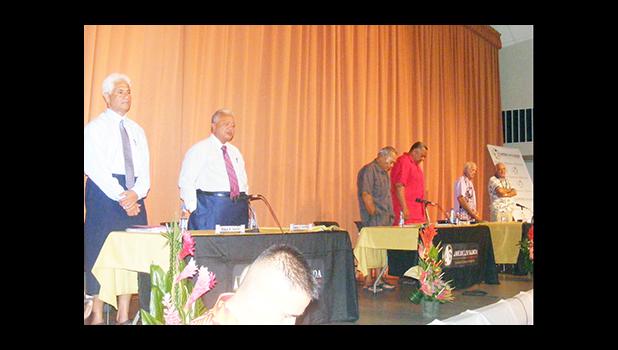 Raised at last week’s gubernatorial forum, hosted by the American Samoa Bar Association, was another long standing controversial issue in the community on whether or not to elect senators by popular vote, similar to the House of Representatives. The forum, which was also televised, was held at the Gov. H. Rex Lee Auditorium.

Currently, senators are selected through a Samoan cultural practice of selection — in this case — by county councils, whose members are chiefly titleholders from villages within the pertaining county; and over the years, there have been suggestions as to whether or not it’s time to elect senators by popular vote, such as in the case of House Representatives. Such a change would require an amendment to the Constitution, in which electors will have to decide via a referendum.

Sanitoa was the first to be asked the question and he responded that both he and Faoa had a long discussion on the matter and “it’s a constitutional issue” and “it’s an issue obviously the people will have to decide. Times have changed. I know things are bit different now, [than] about 10 or 20 years ago.”

“Basically, Faoa and I were looking at, it’s a constitutional issue that if we want to change the way that we select our senators, we believe that it should be decided by the people,” he said. “And that’s where we support a referendum that will have the people decide whether to elect our senators or not.

In response to the question, Salanoa said, “I agree 100 percent. It’s fair and square. That’s the democratic way.” He said in villages they select their senator, bringing back to the Senate the same person, but “what about the other chief. Small chief don’t get a chance.

“So by electing [a] senator, it’s “fair and square. That is the democratic way. And that’s why the people say; our government is incorporated here and unorganized because of this entire problem here. So I agree to vote senator by popular vote.”

In his response, Lemanu pointed out that this is not a new issue and noted, “Our forefathers looked at our rights, our property — land and sea — and our culture and customs. Thanks to our forefathers for the foresight we are now living in this world.”

“I would say the selecting of senators is the purest form of democracy,” he said. “And here’s why. In order for us to select our matai, all the families — it doesn't matter where you live (including off-island) — they all come to select the matai of the family. They select that one person to represent them in family matters, in the village, in the county, in churches and government. Everybody puts their trust in that one person.”

“To me the selection of senator is the purest form [of democracy]. It’s done in front of family, where they do discussions and debates on the selection process. That’s the form of democracy that I think that is a lot open than what we have now in selecting any other officials in our government,” Lemanu said.

He told the audience a survey done a few years ago on the same issue, of American Samoa Community College students, agreed with the current selection process. Additionally, a survey during a recent youth summit showed the youth also support the current process for selection of senators, Lemanu said.

Lolo was the first to respond to the question, in which he declared, “Lolo and Lemanu support the current practice,” adding that selecting senators “has survived this long” so “there must be something important about selecting [them] that way.”

He said there “are two things that are important in our life — our cultural values and our religious values. Those two values, make up our government, it goes hand-in-hand. For our culture to survive, for out religious belief to survive, government must focus on people.”

For Tuika, he said, “it’s dangerous right now and it’s unconstitutional for senators to vote on any bills that affect our daily lives, when they are not voted [in] by us, to represent us.”

“So right now, elect the senators, cut the corruption off. Let’s look at our people and take care of our people, families and protect our treaties with the United States,” he said.

In his response, Faoa said “I think it’s fair for this question to come out, every time the governor is elected, because we need to look at ourselves, we need to look at what our forefathers [set for us] to see if it’s withstood the test of time.”

He acknowledged that there are a lot of young people out there saying that it’s time senators are elected. “Personally, I agree with the governor. I think we still have to hold on for a while,” he said, adding that he doesn’t want to be the one who makes the change that “our forefathers had made for us. I still think... that we have to stay the way it is and let our fathers, our chiefs control the senate.”

“And if it doesn’t work this time, maybe the next time. If we feel it’s time to make a change then we take it to the people, via referendum, and let the people decide,” Faoa said. “But for now, I would like to hold on to what we have now and keep the way the senators are selected by the culture.”