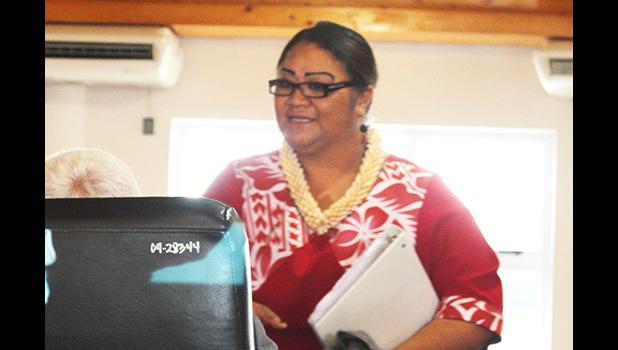 Senate urges: Make sure personnel matters are handled in accordance with the law
By
Fili Sagapolutele
fili@samoanews.com

Pago Pago, AMERICAN SAMOA — Complaints have reached several senators about director-nominees — including the acting Human Resources director, Lynn Pulou-Alaimalo — that upon being appointed as acting directors for ASG offices and departments, they brought in their own deputy directors and new employees.

And this was one major issue that some senators raised with Pulou-Alaimalo during her confirmation hearing yesterday before the Senate Budget and Appropriations Committee, where Sen. Magalei Logovi’i told the director-nominee that career service employees are protected under the law.

Pulou-Alaimalo was later in the day confirmed by the Senate in a 12-yea — 6-nay vote. Her confirmation hearing in the House is pending. (Samoa News — once again points out that all confirmation votes are by secret ballot.)

It was noted at the outset of the hearing, the nominee’s many years of military service, as outlined in her resume, as well as a law degree from Concord Law School and a Masters in Public Administration from the University of Phoenix.

According to her resume, Pulou-Alaimalo had been with the DHR for about two and half years and had many years of work experience and leadership roles while living in the U.S.

However, her outstanding credentials and the fact that she was first educated in American Samoa before moving off-island to further her education — was overshadowed by complaints against her and other director-nominees.

Sen. Fai’ivae Iuli Godinet said there is no question about the nominee’s qualification and education but advised her that there is a “big difference” between working off island and here in the territory. Fai’ivae reminded the nominee that this appointment is for the new administration and to always remember all the workers in her department as they are “your backbone” in the department, which is the “backbone” of ASG.

Fai’ivae told Pulou-Alaimalo to “remember your staff” and don’t rush in to making decisions about them but work with them.

Samoa News points out that some lawmakers, since the start of the new Administration, have received complaints from their constituents of being moved to other divisions of DHR after Pulou-Alaimalo took over the leadership post and brought in her “own people” including a new deputy director.

At the confirmation hearing, Senate President Tuaolo Manaia Fruean told the nominee that complaints have reached the senate that acting directors — when they were first appointed — also brought in with them their own deputy directors.

Tuaolo said such an action cannot happen as there are deputy directors who are career service employees. He advised the nominees not to change what’s already in place in accordance with the law. He also said not to be “personal” in doing her job and it’s not right when acting directors bring in their own deputies.

Another complaint that has reached the Senate, is converting contract workers to career service, as well as the pay increase, said Tuaolo who sought an explanation on this process.

Pulou-Alaimalo gave a summary explanation, which includes that the person must have been working for one-year and there are requirements to be followed. And this is the same process when it comes to pay increases, which includes reviewing the employee’s personnel file.

Tuaolo highly recommended that the director-nominee correct all these problems that have surfaced.

Other senators who spoke also echoed what Tuaolo was saying pointing out that they too have received similar complaints from their constituents and others in the ASG workforce.  The senators urged her to use her law degree to enforce and ensure that all personnel matters are handled in accordance with the law.

Sen. Uti Petelo was direct, telling Pulou-Alaimalo that “you brought in your own deputy director,” but she must do the right thing and follow the law.

Sen. Tuiagamoa Tavai reminded Pulou-Alaimalo that campaigning is over and if she thinks that people who supported the “other side” have experience and are qualified for the job, to keep these individuals in the workforce.

Other senators echoed Tuiagamoa’s statement that the campaign is over with and it’s important that workers be given the time and opportunity to all work together in ASG agencies and departments — including DHR.

Pulou-Alaimalo responded that if she is confirmed as DHR director she will treat everyone equally and agreed that campaigning is over.

Magalei was the last to speak during the nearly 45-minute hearing, saying that most of his questions were raised by Tuaolo. And he informed Pulou-Alaimalo that there is a “merit system” to follow and comply with when it comes to ASG’s workforce, especially career service employees who are protected under the law.

He also said that deputy directors are also career service, who have rights and cannot be pushed out of their posts. Additionally, an acting director cannot come in and bring his/ her “own people”, unless the positions are funded in the annual approved budget.

And “you’re not in the military. You are in the government of American Samoa,” said Magalei adding that there’s a difference between working in the military and in ASG.

He reiterated that ASG workers who are career employees are protected under the law and “you cannot walk in and move somebody out” of the office and bring in new people, whose pay must be included in the approved budget.

Magalei wished Pulou-Alaimalo the best if fully confirmed by the Fono and told the nominee to take the advice that he and other senators have offered, because all these public complaints will come back to both the Senate and House and she will be called back to be questioned.