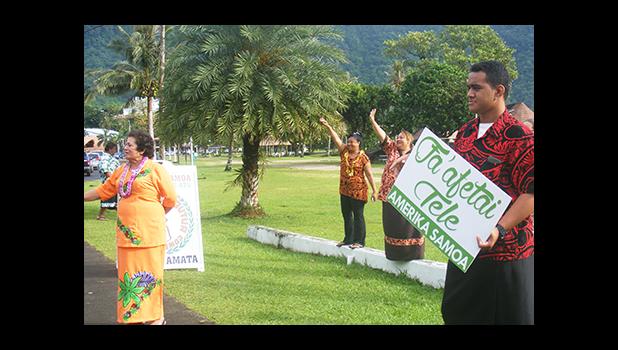 Incumbent Congresswoman Aumua Amata is heading back to Washington D.C. for a second consecutive two-year term in office after being re-elected during yesterday’s general election, beating out a crowd of challengers Meleagi Suitonu-Chapman, Paepaetele Mapu S. Jamias, Tim Jones and Vaitinasa Salu Hunkin-Finau.

In yesterday’s election, the Republican congresswoman’s lead began with results from the polling stations in Manu’a, dominating all five polling stations, followed by the absentee ballots — which included local and off island ballots as well as Swains Islander voters, whose ballots were counted at the Election Office. Amata has dominated the Manu’a polls in the past several elections.

And as the results started pouring in from polling stations on Tutuila, it became abundantly clear that Amata would return to Congress.

When the new Congress convenes in January next year, Amata again joins the majority GOP controlled U.S. House and the U.S. Senate and now the US President-elect Donald Trump following yesterday’s national elections across the nation, defeating attempts by the Democrats to again claim the White House and to claim a majority in the US Congress.

The Congresswoman is expected to issue an official statement this morning as none was available last night.

When asked for comments on the outcome of the election, Vaitinasa said last night she would release an official statement this morning. Vaitinasa, sister of former Congressman Faleomavaega Eni was seeking the Delegate seat for the first time.

In a telephone interview last night, Paepaetele offered his congratulations to the incumbent and other challengers in the congressional race “for all the hard work”.

“It was a tremendous experience, it was hard work and I truly enjoyed it,” Paepaetele told Samoa News. “I went in, knowing that I can open doors for our territory, but if American Samoa does not need my help at this time, I’m okay with it, I still have a smile on my face.”

Paepaetele, who ran for the second time in the congressional race, thanked his strong working campaign committee and the people who voted for him as well as “those who didn’t vote for me and I’m quite okay.”

Just after 6:30a.m yesterday Paepaetele Mapu Jamias was seen at the Avau area of Nu’uuli waving to motorist with a “Thank You” sign.

“Win or lose, this [election] has been a great experience,” Paepaetele told Samoa News on the scene as he waved to motorists who honked their horns. “I’m here this morning to ‘thank you’, the voters and the people of American Samoa.”

There was no immediate reaction from Suitonu-Chapman and Jones to the outcome of the election.