Judge to escapees: "... the rest of the prison population are enjoying life while serving their time.” 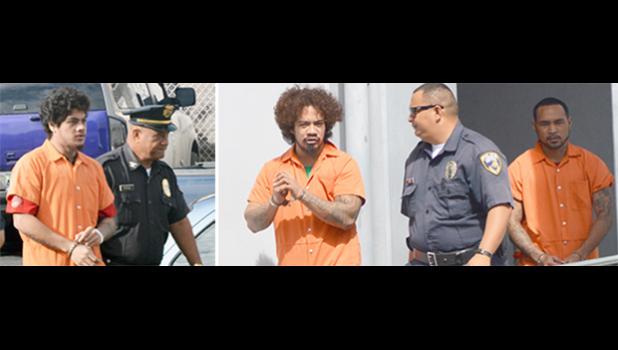 The three sentenced to 5 years each — on top of original sentences
By
Ausage Fausia
ausage@samoanews.com

Pago Pago, AMERICAN SAMOA — Police brutality and inhumane treatment inside prison walls are two of the reasons why prisoners escape from the Territorial Correctional Facility (TCF) in Tafuna.

These were the words of the three inmates who were convicted of escape from confinement in January of last year, when the appeared before Chief Justice Michael Kruse for sentencing last week.

The trio are: Joe Togitogi, Ryan Pite and Joseph Iosefa Iakopo. All were represented by Assistant Public Defender Rob McNeill, while prosecuting the case was Assistant Attorney General Christy Dunn.

The three men claim they escaped from confinement because police treated them like animals, and they wanted to notify their families of the situation.

Before deliberating on the sentence, Kruse asked if anyone wanted to add anything. Counsel McNeill said all three of his clients wished to apologize for their actions. He then asked the court to consider a light sentences for all three men, including probation.

McNeill said that according to his clients, they were mistreated by police and were made to sleep on the cement floor for almost a month. They were also beaten by cops.

Kruse asked McNeill whether he had any records or photos of what he had just mentioned. McNeill said no, he was told of these things by his clients.

“You’re asking for a light sentence but your clients are notorious for escaping from confinement,” Kruse told McNeill.

When given the chance to speak, Pite said he escaped to look for food. He then apologized to the court for his actions and begged the court to allow him to leave prison and go home to his family, because he’s tired of the way the guards treat him and other inmates inside TCF.

Iakopo told the court that the most challenging issue at TCF right now is food and a place to sleep. According to him, they were made to sleep on the cement floor without clothes for 26 days, "and sometimes we slept in the cell with frogs, cockroaches, and centipedes. The officers treat us like animals, but we are not animals, we are human beings like you.”

He continued, “Sometimes, the police officers beat us and when we get injured, the guards don’t take us to the hospital for treatment. The mistreatment of us and other inmates inside TCF is a growing problem right now and that’s the reason why we continue to escape, because we want to inform our families of what’s happening to us while we’re serving our time in prison.”

When Kruse asked why he was in jail, Iakopo said he burglarized — and stole items — from several stores.

Kruse wanted to know why Iakopo escaped from confinement. Iakopo said he wanted his family to know what was happening at the prison.

“I went home because I wanted to sleep in a good place like other human beings. We keep asking our leaders at the TCF to hear our cries but it seems that our cries fall on deaf ears,” Iakopo concluded.

Togitogi shared his own reasons for escaping.

“I was beaten up badly by some prison guards, and they didn’t take me to the hospital for treatment. They don’t provide soap for us, the food is really bad, they allow three inmates to share a tin of fish (pilikaki), and we have to look for rice at every meal.”

He continued, “We don’t have any human rights, they just treat us like slaves and animals. No one wants to sleep with animals. That’s the reason why I left the prison so many times, because I wanted to get some food from home.

“Every night I kneel before God with tears and ask Him for help because there is no one I can turn to. If you want to believe what we just said, pay a visit to the place and observe for yourself. You will believe with your own eyes. Consider our pleas and allow us to go back home. We want to see our family and we want to live a free life.”

In closing, Togitogi offered an apology for what he did and asked the court to review their statements and take action against the prison guards who are behind the alleged criminal acts.

Prosecutor Dunn reminded the court of the recommendation in the plea agreement with the three defendants, which was also echoed in the Pre Sentence Report, that each defendant shall serve a detention period of 5 years.

Dunn said the three defendants are not new to the court, and this is not the first time they escaped from confinement; and now they are before the court with stories as an excuse for their actions.

Kruse took a while pondering on what to say next. A recess was called.

When court re-convened, Kruse said the court has two things to say.

“First, this is the sentencing court and there is no way we can go back to revisit your sentences that have already been issued by the court,” Kruse said.

“Second, out of the whole TCF population, there's only five or eight of you who are coming before this court for leaving the facility. So my question is, why are just eight of you complaining about food and bad treatment while the rest of the prison population are enjoying life while serving their time.”

Kruse said the Judiciary is not in the business of looking into and imposing any kind of conditions relating to the operation of the correctional facility; that is up to the Executive Branch.

“We can’t go back and revisit your sentences. They will stay there until they are served. If you have any problem with the way the facility is treating you, talk to your attorney and he will advise you on what to do.”

Kruse said the three defendants were convicted of escape from confinement, a class D felony, which carries an imprisonment term of up to 5 years, and a fine of up to $5,000 or both.

He then sentenced each defendant to 5 years imprisonment, and the sentence will run consecutively with any imprisonment terms they are already serving at TCF.

According to Samoa News archives, Togitogi has a criminal record that dates back to 2013 when he was convicted of assaulting a homeless man in Nuuuli, and was ordered to serve 20 months as a condition of his 5-year probation sentence.

A few weeks after he was released from prison in 2015, Togitogi was arrested again for assaulting a man in front of a restaurant in Nuuuli.

He was convicted of second-degree assault and ordered to serve a 5-year straight sentence. On Apr. 16, 2016 while serving that sentence, Togitogi escaped from prison and was charged accordingly. In January of last year, the High Court ordered him to serve 3 years for that escape conviction.

Iakopo was sentenced in 2014 to 16 years in jail after he was convicted of 14 burglaries involving six stores, a church, two restaurants, and five homes.

While serving time for a previous conviction, Pite and another inmate escaped from the TCF and burglarized the Bank of Hawaii, KFC and Pizza Hut in 2012.