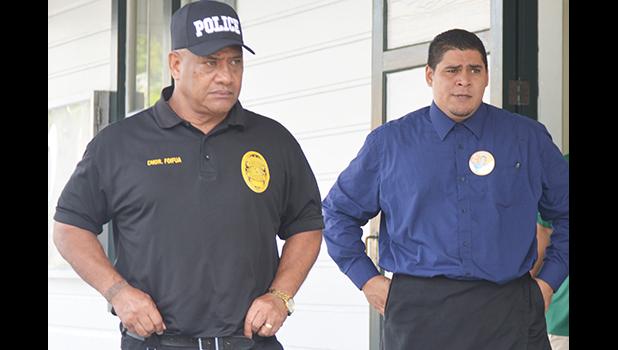 Pago Pago, AMERICAN SAMOA — Thomas Siaumau was found guilty Wednesday afternoon for shooting at a police vehicle on the night of Dec.14, 2017 after a jury of 4 females and 2 males deliberated for less than an hour before returning with a verdict.

The jury found Siaumau guilty of all 8 counts including disturbing the public peace, unlawful possession of a prohibited weapon, unlawful use of a weapon, 2 counts of first degree property damage, first degree assault, and corruption of a juvenile.

The court had dismissed earlier this week the most serious of the charges: first degree attempted murder.

The High Court was packed with police officers and members of the Siaumau family including his mother, who was present in court since day one. Commissioner of Public Safety, Le’i Sonny Thompson along with Deputy Commissioner, Falanaipupu Taase Sagapolutele were also present in court.

Siaumau, 28, didn’t react much when the verdict was read. He bowed his head while defense attorney, Richard deSaulles put his right hand around his back in an effort to comfort him.

deSaulles requested to get each juror’s vote, to determine whether the verdict was unanimous. Each juror voted yes.

A juror who spoke to Samoa News after the verdict was handed down said the government presented sufficient evidence to prove their case, and they were all convinced after reviewing the evidence that the defendant was the one who committed the crime.

When asked which part of the evidence was the most convincing for them, the juror said, “It was the testimony from the only eyewitness, who stated under oath that he saw the defendant and his nephew aim their guns at the police vehicle, and then shoot it.”

Speaking to the media outside of the court house, prosecutor Christy Dunn thanked the jury for their service. She said they did a great job and they took it very seriously.

When asked for a comment, defense attorney deSaulles said they “are extremely disappointed and surprised by this verdict”.

“We were sitting in the courtroom for a week and a half and we feel strongly that the government had not proven this case anywhere close to beyond a reasonable doubt on any of the charges against my client. As you recall, the Judge himself threw out the most serious charge of first degree attempted murder even before the defense called it first witness,” deSaulles said.

He added that he is curious with the way the Judge had asked to meet with the jurors after they were discharged from the courtroom, and he believes there was something very unusual with this guilty verdict.

“You indicated that there were 7 different charges and each of those charges had multiple elements that needed to be determined. We don’t understand how the jury could’ve gone through all these elements in 30 minutes.”

For now, deSaulles said that they are exploring all of Siaumau’s appeal options, as they want to make sure they push the case to pursue the appropriate appeal remedy.

Sentencing is set for Apr. 18

At the start of the final day of trial, the defense asked the court for the removal of over 20 uniformed police officers who were inside the courtroom. deSaulles informed the bench that a Facebook post by Dunn the night before the last day of trial asked that police officers be in court to show the jury their support of the Department of Public Safety and the two officers who were involved in this case, Leomiti and Lepou.

The defense lawyer said they are disturbed with the presence of so many uniformed police officers, and their presence would unduly influence and prejudice the jury for a conviction. He said the communication from the government was inappropriate and unethical, and requested that  the uniformed officers be asked to leave but if they wanted to return as plain-clothed observers, it would not matter.

Dunn claimed that she had nothing to do with the message, and argued that the officers - just like the relatives and friends of the defendants - have a right like any member of the public to be in court. She reminded the court that heavy police presence has been evident since the start of trial a week ago.

After hearing from both sides, a recess was called.

When court re-convened, Sunia said this was an unusual situation and there is no case law or a precedent for the court to rely on. He said the court weighed the defendant’s right to a fair and impartial jury, against the first amendment rights of any member of the public to be in court.

He added that while there have been police officers in the courtroom throughout the trial, what is different this time is that this was a staged appearance. He said the court finds that the risk of undue influence on the jury from the heavy presence of uniformed police officers was not acceptable.

He then ordered that all except the number of officers that were seen at the trial, which Sunia deemed to be six, leave the court room.

Dunn told the jury that on Dec. 14, 2017 Siaumau tried to kill two cops with an AK-47 by shooting at the police vehicle.

He wanted to get back to the police for arresting his brother, and it’s only by the grace of God that saved the lives of these two brave police officers who were only out there doing what they were called to do, and that is, protecting the safety of our people.”

She reminded jurors about the testimony of J.M. who said he personally saw the defendant with his nephew aim their guns to the moving police unit before they both shot at it.

Assistant defense attorney, Daniel Holladay said, the government did not present any physical evidence to connect Thomas Siaumau to the crime. “They did not find any guns or any fingerprints on the evidence they sent off island for testing. So, the government’s case relied on the testimony of one witness.”