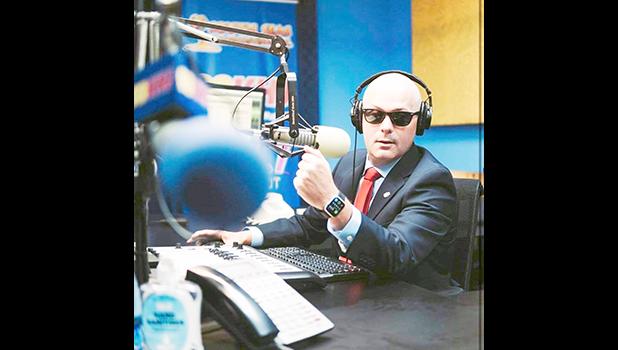 Pago Pago, AMERICAN SAMOA — KHJ’s John Raynar is one of five finalists selected to receive The Marconi Award for Small Market Personality Of The Year.

Measles, coronavirus, tropical cyclones and a tsunami.  It was another exciting year in broadcasting for John Raynar and the 93KHJ morning show.

When a measles outbreak in the region briefly sent the territory's health officials into overdrive, John worked closely with the local government to both craft and spread life-saving information. It was then that the station perfected its playbook for the looming COVID-19 crisis.

The island remains COVID-free with its borders closed and John Raynar is still a clearinghouse for public information while efforts to repatriate and quarantine returning residents continue.

Commenting on his nomination, Raynar said “First and foremost, I thank Jesus Christ for the chance to represent American Samoa on such a prestigious stage and also thank my colleagues; Sia Atofau, Joey Cummings and Monica Miller who play just as an important role in our station’s coverage of these events, I would not have received this opportunity had it not been for them, team work makes the dream work! Regardless if I win or not, I am humbled to be named for such an honor and all the glory goes to God”

The winner will be announced at the National Association of Broadcasters Convention this October is Las Vegas.

The Marconi Radio Awards are presented annually by the National Association of Broadcasters (NAB) to the top radio stations and on-air personalities in the United States.

The awards are named in honor of Guglielmo Marconi, the man generally credited as the "father of wireless telegraphy". NAB member stations submit nominations.

A task force determines the finalists and the Marconi Radio Award Selection Academy votes on the winners, who receive their awards in the fall.