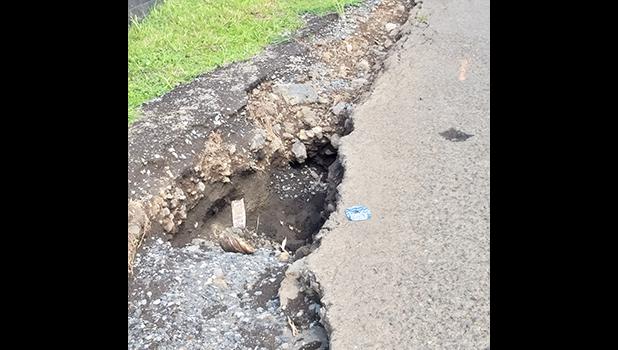 Pago Pago, AMERICAN SAMOA — This recent photo taken by Tualauta Rep. Larry Sanitoa shows a large ditch along the side of the road entering the Kokoland area, next to the CCCAS Ierusalema Fou Church.

This is an area of the road that was dug by Paramount Builders Inc., which was contracted by the American Samoa Power Authority (ASPA) for underground power lines. The area was covered with cinder, but with recent heavy rains, the cinder washed downwards towards the Fagaima road.

Kokoland residents contacted Sanitoa to help resolve the problem, as the ditch is right next to the stop sign and can be very dangerous for motorists, especially at night. Samoa News observed over the weekend, two vehicles encountering the problem, around 6a.m. (while still dark outside) this past Saturday morning.

Sanitoa brought to Young’s attention, what he calls “a very serious concern by residents about a dangerous trench in this area”. He also shared with Young a message from a nearby resident, who says the “problem came about after Paramount Builders dug up the area for the ASPA underground power line.”

“Evidently the area was not properly compacted; and given the dangerous runoff within the area every time there is a torrential downpour, the erosion has gotten bigger and the trench is now a lot deeper,” Sanitoa explained.

After his visit to the site, Sanitoa requested Young for the contractor to patch up the trench and work on a long-term solution.

Young responded, “We are working with [Paramount Builders] to fix all areas affected by this ASPA project by June 30, 2019.”