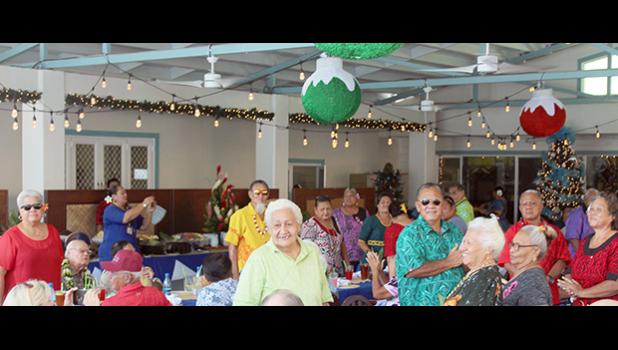 Pago Pago, AMERICAN SAMOA — It was a day of “Thanksgiving” on Tuesday, when LBJ Medical Center held a ceremony to celebrate the 100th successful total knee replacement surgery — a surgery that has been available at the hospital since late last year, led by Elder Dr. John Edwards, who has been accompanied by his wife Rebecca — a licensed social worker — during their 18-month missionary work through The Church of Jesus Christ of Latter-Day Saints Medical Mission to American Samoa.

Among those who attended the ceremony -­ marking the 100-plus patients who have gone through the new orthopedic knee replacement surgical service which began on Oct. 22, 2019 at the hospital were several patients themselves as well as their family members.

In his remarks, Dr. Edwards expressed appreciation to the LBJ administration, leadership and medical team for their support and professionalism. He also thanked “two other really important groups” and one of them is the families of the patients.

“The families played an important role, an incredibly important role. Because the way we decided to do this program, is the way we do it on the mainland,” he explained. “You don’t stay in the hospital. You have the operation then you go home.”

“And guess who your physical therapist is and who your nurse is? It’s the family. It’s hard work, but they did it. They came to the task and they helped those people who needed their knees replaced,” he pointed out.

The second special group is the patients, “who had the courage and the faith and the commitment and the belief that we can do it here in American Samoa,” he said. “That first group of patients who went into the operating room will forever be in my heart. I love every one of you. And I’m very grateful for the opportunity that we’ve had of being able to serve you in this capacity.”

“This is about the love, that our Heavenly Father has for the people of American Samoa,” said Dr. Edwards, a US certified Orthopedic Surgeon, while his wife, assists the hospital, Health Department and the American Samoa Community College nursing program.

At Tuesday’s event, Dr. Edwards praised Drs. Ledua, Aitaoto and Traill, as well as others, saying that this would not have been possible without them.

Aside from Dr. Edwards — who is also an Olympian physician — and his wife, who arrived on island June 2019; other physicians and their wives on the church’s Medical Mission to American Samoa currently serving at LBJ are:

•           Elder Dr. Gregory Patch, Radiologist, and wife, Sister Janene, who is a Licensed Practical Nurse assisting the hospital. They arrived in early October 2019; and

•           Elder Dr. Robert Keddington, an Emergency Physician, and wife, Sister Sue Belle, a Behavioral Health Specialist assisting the hospital. They arrived on Aug. 25th. Despite the COVID-19 Pandemic and travel restrictions, LBJ was able to bring them in via the Coast Guard C130 flight as approved by the Governor, COVID-19 Task Force and FEMA/DOD. The couple went through the required 14-day quarantine.

The service to the hospital and the people of American Samoa by the physicians and their wives is free of charge as part to of the medical mission. The 18-month mission for Dr. Edwards and his wife has come to an end and they will be returning to the US mainland, once air travel is re-opened.

At the outset of his remarks during the ceremony, Dr. Edwards described the gathering as “aiga” — which he says is his favorite Samoan word — “because this feels like family.”

Speaking on behalf of Drs. Patch and Keddington and their wives, Dr. Edwards told the audience, “thank you for the love, and the support, and the welcome from this island.”

“This island is very special to us. To all of us, this is home, in more ways than we ever dreamed imaginable when we left [the U.S],” he said, and he also thanked “the Heavenly Father for the opportunity He gave to us to come here and to be here.”

“The blessings that we have received as we have been able to serve, have been immeasurable. And we’re so grateful for it,” he said and also expressed appreciation to the LDS Church for the opportunity to serve in the territory.

Dr. Edwards revealed that he and his wife, had always wanted to serve on a church mission as a couple.

“So, when we got our call to American Samoa and to work at LBJ Medical Center, we knew that’s where our Heavenly Father wanted us,” he said. “And we have felt that commitment and that confirmation every day of the 18 months that we’ve been here.”

Attorney General Mitzie Jessop-Ta’ase — a member of the Church of Jesus Christ of Latter-Day Saints and a graduate of Brigham Young University Law School — represented Gov. Lolo Matalasi Moliga at the ceremony.

And the governor extended “heartfelt thanks” to the church and Elder Vince Haleck — who was instrumental in bringing the medical mission to American Samoa — “for the blessings that the territory has in bringing the missionaries here,” said Jessop-Ta’ase, who commended Dr. Edwards for everything that he has done for American Samoa.

“Even if that means he’s got to fight, and scrap and throw some people under the bus. But it’s for the betterment of our territory and I can attest to that. I’ve been working with the governor for many years,” she said.

“There’s not enough words in the Samoan language or the English language to say thank you to the Church and our missionaries. So, thank you very much and we wish you the best,” she added.

Elder Haleck, along with the three physicians were presented special letters of thank you from the governor for their contribution and service.

The celebration was held at DDW Restaurant.

(Samoa News will have more on the medical mission in Monday’s edition.)