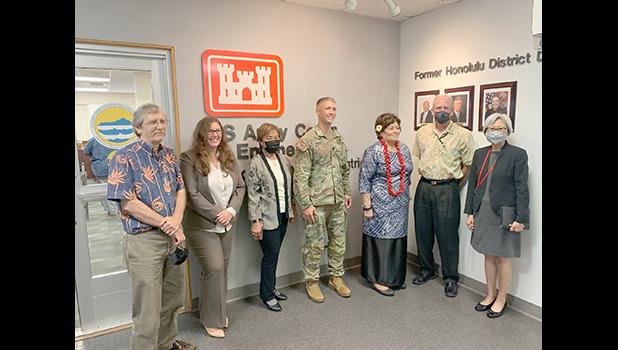 Washington, D.C. — Congresswoman Uifa’atali Amata met with Honolulu Commander Lt. Col. Eric S. Marshall and the Army Corps of Engineers last week, and was briefed on the status of their numerous projects in American Samoa, and discussed their previous report on LBJ Tropical Medical Center.

At the request of Congresswoman Amata, Lt. Col. Marshall and the Army Corps agreed to review and update that assessment of LBJ to reflect the effects of the pandemic on construction costs. The Army Corps of Engineers is also willing to take a leading role in the necessary removal of the abandoned fishing vessel that is breaking up on the rough waters of the reef near the airport, which would be an important project to prevent more debris in the water over the long term.

The Army Corps of Engineers has a series of ongoing work in American Samoa, including a detailed Tafuna flood risk study, a watershed assessment in the event of natural disasters, shoreline erosion study for Ofu Airport, an Aunuu harbor maintenance project, and a climate change vulnerability study focused on drainage and culvert infrastructure.

“The Army Corps of Engineers is always busy in American Samoa and these are important projects,” said Congresswoman Amata. “These studies can require time-consuming research, but the results help guide decisions by both the federal government and American Samoa Government. I especially appreciate their willingness to be involved in a solution for the damaged fishing vessel on the reef.”

“I appreciate their essential report on LBJ Tropical Medical Center, which came at my legislative request and was a foundational requirement to know the full scope of the need at LBJ,” she continued. “They did a great job with that report, establishing the necessity of modernization and describing our possible alternatives, which vary in degree of investment.”