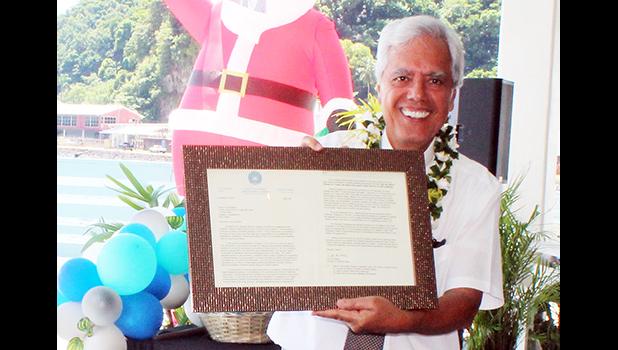 Pago Pago, AMERICAN SAMOA — LBJ Medical Center chief executive officer Faumuina John Faumuina expressed sincere gratitude to The Church of Jesus Christ of Latter-Day Saints Medical Mission to American Samoa which made it possible for many local residents to undergo knee replacement surgery at the hospital, which would not have had the finances to send patients off island for the medical procedure.

Faumuina made the public statement at last Tuesday’s ceremony, hosted by LBJ, marking the 100-plus patients who have gone through the new orthopedic knee replacement surgical service, which began on Oct. 22, 2019 at the hospital.

Also, during the ceremony, the Church’s Elder Vince Haleck — who was instrumental in bringing this service to American Samoa without charge to LBJ — promised to continue to recruit other specialized physicians for the territory, through the medical mission.

According to LBJ information — shared with Samoa News — it was sometime in 2018 that Faumuina reached out to Haleck who, at the time, was serving in the Church’s Pacific Area Presidency in Auckland, New Zealand. Faumuina petitioned Haleck for assistance in bringing medical physicians in any shape or form to the territory, specifically for LBJ.

Sometime in March 2019, Faumuina received an email from Haleck saying he would bring Elder Dr. Weatherton Clayton and his team for a short visit.  Dr. Clayton is the Medical Director and head of the Church Medical Missionary Department (Worldwide) for the Church’s headquarters in Salt Lake City.  And the visiting team would assess the needs of LBJ.

The following month, in April, Dr. Clayton and his wife, were joined by Elder Dr. Saunders who oversees medical needs of missionaries and Church personnel in the Pacific Area. They met with Faumuina, along with chief medical officer Dr. Iotamo Saleapaga and the medical staff and toured the hospital.

After their assessment, the hospital was “given wonderful news” that the Church would partner with LBJ for a physician-medical mission, according to LBJ.

Elder Dr. John Edwards received a call for the knee replacement service at LBJ. Prior to the arrival of Dr. Edwards and his wife on June 3, 2019, — the hospital’s Operating Room (OR) needed infrastructure renovations to be able to handle knee replacement surgery. A new Air Handling Unit (AHU) — air filtering system — was installed (AHU- York Unit).

While this work was being carried out, as well as awaiting the arrival on island of the knee replacement equipment, Dr. Edwards — also an Olympian physician — was invited by the American Samoa National Olympic Committee (ASNOC) with other LBJ healthcare professionals to join the American Samoa Medical Committee to Samoa for the Pacific Games in July 2019.

In early October 2019, Elder Dr. Gregory Patch, a US certified Radiologist, and wife, Janene arrived on island — in time for the news conference on Oct. 21st announcing this knee surgical service at LBJ.

Speaking at the ceremony held at the DDW Restaurant’s Ocean View section, Faumuina expressed a sincere thank you and appreciation to the Church as well as Elder Haleck. Faumuina also gave a brief summary of how he connected with Haleck to bring the Church’s Medical Mission to American Samoa.

Faumuina told the audience that Dr. Edwards — prior to his arrival on island — sought to ensure that there are sufficient facilities and equipment at LBJ to carry out the new surgical procedure. “At the time, I was stretched financially with the LBJ budget, but I committed every penny to fulfill Dr. Edwards’ request,” said Faumuina.

He also said that Dr. Patch requested an MRI for LBJ, which then conducted a search and found that it would cost more than $2 million.

“But it has to be done,” said Faumuina, who revealed that the MRI is ordered, and an engineering company is prepared to travel here to assess the site for the MRI.

A new addition to the Church’s Medical Mission to American Samoa is Elder Dr. Robert Keddington, an emergency room physician and wife Sue Belle. The couple arrived on island in August, on board a federal plane and went through the required quarantine period.

“These physicians are not compensated by the hospital. And these are the benefits that are rarely received by anyone and we are blessed to receive such benefits,” Faumuina said, and pointed out that LBJ would not have been able to send all 100-plus patients who went through knee surgery at the hospital for off island surgery.

He reminded the audience that the wives of the three physicians “are all specialists in their own field” and are working at the hospital without compensation, just like their husbands.

Faumuina asked Haleck to please continue the search to find a replacement for Dr. Edwards — whose 18-month mission with his wife, is completed and they are preparing to return to the US.

In his remarks, Haleck recalled, during the time he was leader of the Church for the Pacific area that he observed the high number of local residents traveling to New Zealand for knee replacement surgeries. He recalled asking himself if there are this many local residents seeking such medical procedure in New Zealand, how many more are in the territory who are unable to travel off island for this surgery?

With the help of Church leaders, he said a medical mission was set up to offer medical service at no charge, to help relieve the suffering for those who were homebound and unable to travel off island for surgery.

“So I’m grateful and give full credit to the First Presidency of the Church and his Counselors and the Quorum of the Twelve Apostles... they were able to look at our proposal and gave a positive response” by sending physician to assess the situation at LBJ, thereby solidifying the doctors to come to the territory, he said.

And while Dr. Edwards and his wife have completed their 18-month mission, “they will be back, as they consider American Samoa their second home,” said Haleck to applause from the audience.

He explained that each missionary is here “for 18 months to provide service to our people at no charge. We continue to recruit for other doctors to come, [but] it is difficult to recruit doctors, to leave their practices for 18-months. But these 3 wonderful doctors have left their families and their homes. We hope in the future that there will be others that will come.”

Furthermore, “we are looking at reducing 18 months to a shorter period of time so these physicians can come and provide the service and be able to return home to rejoin their medical practice.”

(See Samoa News edition last Friday for part one of this story.)