Local residents have high praise for village aumaga during tsunami 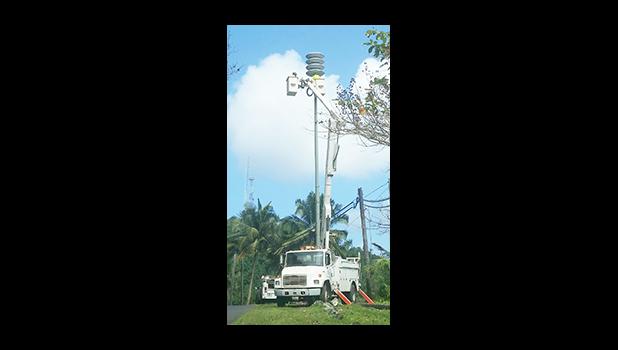 Pago Pago, AMERICAN SAMOA — While members of the Tongan community in American Samoa are urging their families and friends around the world to keep the people of Tonga in their prayers after the volcano and the tsunami that affected the islands last Friday (Saturday in Tonga), locals are also praising the response from the village aumaga while American Samoa was under the tsunami warning last Friday.

Members of the Tongan community from Pavaiai told Samoa News that many were in communication with their families about the volcanic eruption at the Hunga Tonga-Hunga Ha’apai just as it was happening and were immediately cut off as they were trying to get more information on the situation back home.

“We’re asking all Christians around the world including our families and friends in American Samoa and the everywhere to please remember everyone in Tonga in your prayers,” a member of the Tongan community in American Samoa said.

And Congresswoman Uifa’atali Amata yesterday released a statement of condolences for the people of the Kingdom of Tonga. “The people of the Kingdom of Tonga are in our thoughts and most importantly in our prayers during this sad time,” she wrote.“I think especially of families who haven’t heard from loved ones yet because of the limited communications following the devastating tsunami and volcanic ash.

“In American Samoa, and neighboring Samoa, we have deep memories of the 2009 tsunami, and our hearts go out to Tonga as they help neighbors, assess the damage and begin recovery efforts. The United States and other nations have been generous in times like this, and I think we will see both possibilities of international aid and private charitable help, and I know God will bless such efforts.”

“May God be with the people of Tonga and the decision-making of their leaders,” Uifa’atali concluded.

Just before 6p.m last Friday afternoon, the National Weather Service issued a tsunami advisory and just moments later it was quickly upgraded to a warning.

Pointedly lacking were the tsunami sirens signaling the warning as the sirens have been out of service for a couple of years now — fixing them has been problematic since the territory closed it borders, according to the director of the local Homeland Security during a Fono hearing in February 2021.

At the hearing, the director noted that ‘moving to higher ground’ immediately when you feel the ground move, was the best option, whether the sirens were working or not.

Around 7p.m, crowds of people and vehicles were seen going up the Fagasa road. Parents who were walking carried their children while making their way up the steep incline.

And the bells never stopped, but kept ringing, sending the message to everyone that something was happening.

Police sirens were also activated around the same time with patrol cars on the road informing people to move to higher ground. All stores in the Pago Pago village were closed down.

Theresa Taulaga of Aua contacted Samoa News to report that a lot of people were moving up to the Afono road for safety.

Amelia Toilolo of Tafuna posted on her Facebook page saying that they had just arrived in Aoloau and the traffic was slow because a lot of people were heading up that way.

Some families, who live in Fagagogo, made their way to the golf course after the warning was heard.

A man from Aunu’u posted on his Facebook page last Friday night that people of Aunuu were evacuating to the top of the mountain after the tsunami warning was issued.

People were praising the response from the village aumaga and the use of their bells to send the message to the community to move to higher ground for their safety. However, they also questioned the reason why the tsunami sirens were not functioning.

A woman posted on her Facebook page, “aumaga ‘sirens’ led people to safety vs a multi-million dollar siren system that did nothing.”

Luckily the deadly tsunami of 2009 was still fresh enough in memory for people to heed the makeshift warnings and make their way to safety.

American Samoa’s territory-wide siren system was commissioned in 2011 on the second anniversary of the devastating September 29, 2009 tsunami that claimed the lives of 34 local residents.  It includes 48 sirens, which are situated strategically throughout the islands.

Milwaukee, Wisc. based American Signal was awarded the $1.92 million contract for the “ASG Emergency Alarm System” project funded by the U.S. Department of Homeland Security.

The eruption of the underwater Hunga Tonga-Hunga Haʻapai volcano, about 40 miles north of Nuku'alofa, on Saturday shot thick ash and steam over 12 miles skywards.

The New Zealand High Commission reported the damage on Tonga's main island of Tongatapu is centered along the western coast, where there are many resorts, and the waterfront of the capital, Nuku'alofa.

More details in other stories elsewhere in this issue.