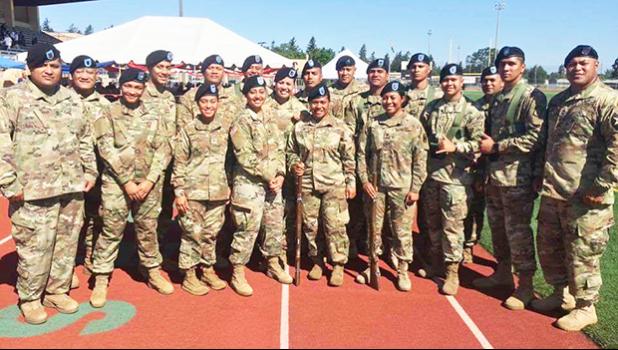 The local US Army Recruiting Station has done it again. Breaking records as far as getting the territory's future heroes on their way to being 'Army Strong'.

On Sept. 9,  2014, the local US Army Recruiting Station was ranked #1 (worldwide) in production out of the 885 Army recruiting stations and centers under the United States Army Recruiting Command (USAREC), which includes all regions representing the 50 US states, Puerto Rico, Guam, the Commonwealth of Northern Mariana Islands, the Federated States of Micronesia, Palau, the Republic of the Marshall Islands, Korea, Japan, and Europe.

During FY 2014, the local US Army Recruiting Station put in a gross total of 153 recruits.

The following year in 2015, the total number of recruits increased to 171.Last month, the local US Army Recruiting Station set yet another record.

This time, for the Delayed Entry Program (DEP), signing up 70 for active duty and 10 for the US Army Reserve — the highest number for a single trip — globally.

"This is the highest enlistment from one  recruiting office within a two-week timeframe," shared Sergeant First Class (SFC) Kenny N. Tran, the head of the local US Army Recruiting Station, headquartered on the second floor of the Laufou Shopping Center in Nuuuli.

The Delayed Entry Program, SFC Tran explained, means "our applicants can sign their contract and wait until training date. During this time, their  status  changes from 'applicant' to Future Soldier (FS) and they are  placed in the DEP to hold their training  seat."

A Future Soldier in the DEP is required "to maintain their physical standard as the day they entered the DEP, and the recruiter will assist them with additional administrative requirements prior to training date i.e. physical training, bank set-up for direct deposits, and completing and passing the occupational physical assessment test."

According to local recruiter SFC Shaun Salanoa, there are three DEP trips per fiscal year. This year, they set the new record for a single DEP trip with 80 recruits. The highest number prior to that was 71, a record that was also set by the local US Army Recruiting Station back in 2015.

SFC Tran said that this year's DEP record is a result of a combination of things, with more exceptions being granted and more training seats opening up for the territory's applicants.

SFC Salanoa said those interested in joining the US Army can register to take the ASVAB (Armed Services Vocational Aptitude Battery), which is the initial step in recruitment.

Registration can be made at their Nuuuli office and the actual testing (held every Wednesday) is conducted at the SFC Konelio Pele Army Reserve Center in Tafuna.

In January 2012, American Samoa made national headlines when it recorded the highest number of casualties in Iraq per capita than any other part of the United States. That year, over 4,250 American service members had been killed in Iraq and 17 of them were from American Samoa.

The US Army has become the go-to for local parents looking to give their kids a bright, guaranteed future. The Army offers money for education, comprehensive health care, family services and support groups, special pay for special duties, and cash allowances to cover the cost of living.