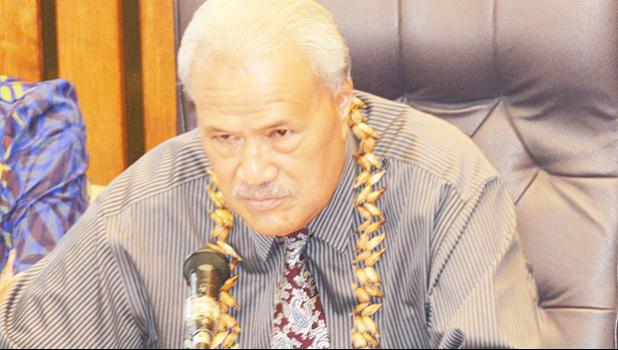 Secretary of Samoan Affairs, Mauga T. Asuega, has informed senators of the governor’s plans to establish a commission to address the drug problem in American Samoa, saying that the whole community — not just the government — needs to work together to fight this problem that is spreading faster than the Zika virus.

Mauga was among the nearly 10 witnesses at Monday’s Senate joint Education and Government Operations committees hearing on drug problems in public schools, following a recent incident at Fagaitua High School, where seven students are alleged to be involved in drug use. (See yesterday’s edition for details.)

Samoan Affairs officials as well as Mauga were requested to be present at the hearing so that senators could learn of their efforts to combat the drug problem in high schools that Senator Tuaolo Manaia Fruean said last week was spreading like “cancer” to include elementary schools.

Mauga said the issue now before the Senate has been around for a long time and it’s not specific to the governor and the government to address, but it involves everyone — individuals, leaders, villages, churches, counties and the entire community.

He also pointed out that a person faced with a drug addiction, could become a very serious problem within a family, as the addicted person, for example, a man, ends up assaulting his wife and children. Therefore, he says, the drug problem is a serious issue and everyone in the community plays a role.

The Secretary of Samoan Affairs said the administration is also looking at getting representation from the Fono, whose help is needed in areas such as passing legislation to strengthen current laws, which he says are not strong enough to deal with drug issues in the territory.

The paramount chief also said that there is a need to come up with drug rehabilitation programs for those involved in drug use so that these individuals can return home to their community and villages — after being jailed — to become good contributing members of society.

As to the Office of Samoan Affairs role, Mauga said traditionally leaders have been encouraged to do more in their community to address this problem and this includes working together at the village and county levels.

Additionally, leaders have been encouraged to enforce village rules and this includes village curfew. He said the spread of the drug problem in the territory will continue at a much faster pace than the Zika virus, if nothing is done to address it right away.

Mauga told senators that he continues to stress at the governor’s cabinet meetings that “if you see something, say something” — and don’t be afraid to do the right thing.

At a cabinet meeting last September, then Police Commissioner Save Liuato Tuitele told directors about the drug problem in the territory, with people having easy access to drugs — not only youths but adults. Additionally, the “availability of ice” is easy in the community.

And during a cabinet meeting last December, Mauga called for every level of the community to unite in the fight to get rid of these illegal drugs, which he said have “infested” the territory and are the “silent killer” in the community.

Illegal drug problems were one of the many issues raised during a gubernatorial forum last October and Lolo said, at the time, that “After observing this big problem… we are facing, what we are trying to do now is to appoint a task force that will look into the problem and recommend solutions... as how we can best deal with the drug problem in American Samoa.”