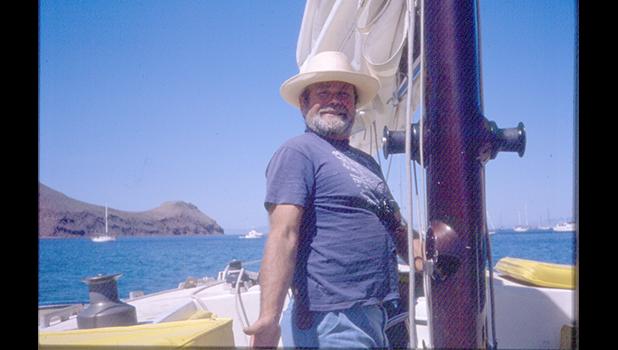 Concord, CA — Born in Oakland CA on May 6, 1935, Ralph Dale Long grew up in the East Bay area and lived there and in San Francisco with his two children — Ken and Jennifer — until the late ‘60s.

It was then he took the family to Oregon and gave up playing bass in smoke-filled rooms and devoted full time to contracting and engineering — building swimming pools throughout the ‘70s.  After his children were out of school and on their own, he actualized his dream — he built a 39-foot Jim Brown designed trimaran he named “Long Run” and sailed off to see the world.

After blocking highways and with a team of police escorting him out of town (how appropriate was that?), he towed the Long Run to the Columbia River and then down to the sea. Over the Columbia sandbar before the weather became too inclement to sail south, he headed off on his adventure and ended up voyaging from the Pacific Northwest, eventually coming to the South Pacific.

Many of you who know him have heard or read his stories of friends, events, vignettes, short stories and reminiscences. One of the things he considered a high mark in his life was his friendship with Samoan playwright John Kneubuhl, who encouraged Dale to keep writing and also encouraged him and his first mate (who is also his wife) to build a little house at Olo Taputimu and live there for many, many, many happy years.

Dale built pools for a number of people on island and also houses for some with his company RDL Associates. He had his ups and downs, but he never sacrificed his principles. And he didn’t care what people thought (or what the customer might want, it was Dale’s way or the highway).

If he said he was going to do something — he could be counted on. He was a Mason, a Shriner, a Lion and sponsored the American Samoa chapter of the environmental youth group, 350.org. He also was a proud member of the legendary Writer’s Group that met one Saturday a month at John’s house to eat, drink, be merry and read their latest works.

The last four years of his life, he has lived where he grew up, in Concord, CA. He spent time early on with old friends and family before his health (but not his wit and intellect) failed. His passions were truth, his two grandsons — Alex and Colby, the environment, and the state of the nation (which ever nation he happened to be in at the time — he passionately worked to make it better).

He is resting in peace (in a beautiful little wooden box, on a shelf above his wife’s desk), while his spirit is off on its next great adventure.

(The Samoa News and Annesley families offer our condolences to Dale’s family on his passing. We have many great memories of his ‘vibrant’ voice, and will miss our friend.)