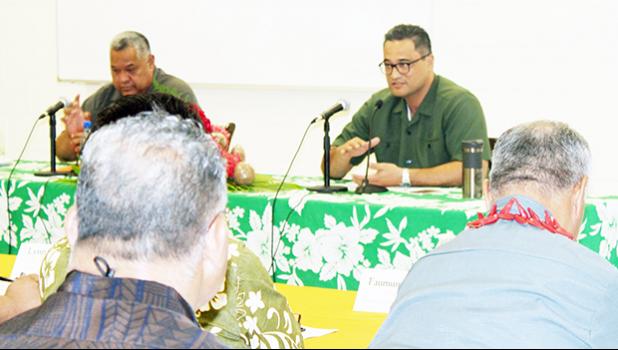 First time this admin has invited private sector media to the cabinet
By
Fili Sagapolutele
fili@samoanews.com

Pago Pago, AMERICAN SAMOA — With the third stimulus check of $1,400 per qualified tax payer to be released “soon”, in which a family of ten is estimated to get $14,000. Lt. Gov. Talauega Eleasalo Va’alele Ale, urged the territory’s workforce not to quit their jobs, but save that money for rain days and the future.

Talauega’s made the passionate plea during yesterday’s cabinet meeting, at the Agriculture Department’s Conference Room where he first pointed out that there is an issue of importance that he has thought about for a while and wanted to share with cabinet directors.

He said the issue is also of importance to Gov. Lemanu Peleti Palepoi Sialega Mauga, as he wants to ensure that the community continues with blessings in the future.

The lieutenant governor declared that currently in American Samoa there blessings are plentiful with many financial resources in the hands of the people  and it has reached a point where people don’t want to work and have quit their jobs. “They walk away from their jobs,” he said.

Talauega pointed out that StarKist Samoa is looking for workers, and so is Bluesky Communications and other businesses such as restaurants, as people have quit their jobs because of the many financial resources now available to them.

“Why do I need to go to work when I have free food from ASNAP? When I get stimulus money? No need,” he said of what workers are thinking, and referring to ASNAP as the local federally funded food stamp program administered by the ASG Department of Human and Social Services.

“This is a very important issue. Its’ an issue that... could be the up-ending of our economy if we don’t think about it and talk about it,” Talauega told cabinet members, noting that the community should be made aware that “this is [a] once in a life opportunity, when we’ve flooded with all sorts of resources.”

From his perspective, Talauega said this is the time that the community should look to the future for their families.

“This is your time to get ahead. All of us live paycheck to paycheck. By the time the next paycheck comes, it’s already spent,” he said. “And God forbid, if there is a fa’alavelave between that time. That means half of the bills are not going to get paid.”

“So I think we need to discuss this issue. Not necessarily, a command from the government, but a community discussion. That people — ‘don’t quit your job’. This money that you’re going to get is going to be over,” he said and then spoke of the new $1,400 a person for the federally funded third Economic Impact Payment (EIP) or stimulus check.

According to the US Internal Revenue Service, the 3rd EIP amount is:

ª          $1,400 for each qualifying dependent with a valid Social Security number or Adoption Taxpayer Identification Number issued by the IRS

“These monies for some of our families is huge, it can change their lives. But I worry that people are not... saving it, investing it. But instead are quitting their jobs, living off this $1,400 for however many days,” he said.

Talauega said he is concerned with something happening that would impact people once these new financial resources are gone and over with, people will be back to where they were, struggling, as they have quit their jobs.

People will go knocking on the door to the Governor’s Office every day, saying, “I need a job, I need a job,” he said, “but there’s tons of jobs out there. StarKist is looking for workers and they pay good wages.”

He said workers are walking away from their jobs, not working, because of all this money.

Talauega suggested to cabinet directors that, “if there is a way for you to relay the message to your communities, people that are close to you and consider you to be a good counselor, please talk to them about managing their finances well, at this UNUSUAL time. Because it could be a time for us to catch up.”

He encouraged the government owned Territorial Bank of American Samoa (TBAS) to put in place programs that “encourage people to deposit their $1,400 check in the bank to open a CD account, invest that money for rainy days. But don’t quit your job when you get that money.”

Talauega said these new plentiful financial resources should “remind us – let’s not waste this opportunity” but “for our people to save and create wealth, that will be long lasting, versus - just using that money to buy big-screen TVs, another iPhone, everybody has iPhones now. Instead of doing that why not save that $1,400 and watch that money grow, while you continue to feed it with your regular paycheck.

He concluded his passionate plea, “maximize your stimulus check by putting it in the bank and watch it grow, or put it in a CD and watch it grow, so that you can use it to put your son or daughter through college or other things like that.”

He again suggested that cabinet members do all they can to share this message with their community.

This is the first time that the Lemanu Administration, has invited local broadcast and print news outlets to a cabinet meeting since taking over the helm of government in January this year.