Lualemaga Faoa remembered as a pillar of the community 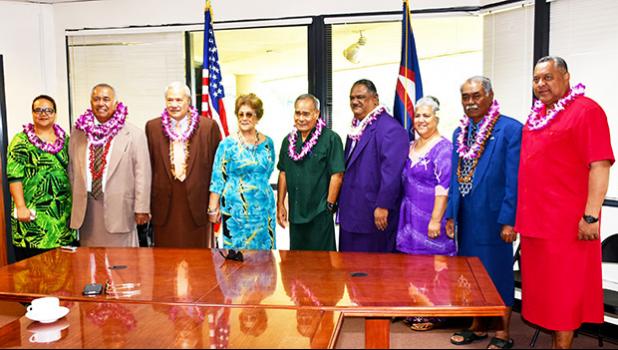 He was a leader who raised concerns and publicly spoke out on issues
By
Joyetter Feagaimaali’i-Luamanu
joyetter@samoanews.com

“We have lost a great traditional leader, he was a pillar in his county, his village, his family and the Government of American Samoa, for he has worked in all of the three branches of the government,” said Governor Lolo Matalasi Moliga, who is stunned by the news that Western District Governor Lualemaga Faoa has passed away.

Lualemaga passed away at the LBJ hospital on Tuesday afternoon, after a sudden illness. His passing came as a shock to close friends who were just with him last week.

A Paramount Chief from Aasu, Lualemaga served as an Associate Judge, a Senator and his latest post was as Western District Governor for two terms. He had just been sworn in two weeks ago to serve his second term.

Governor Lolo, who is among those who found it hard to accept that Lualemaga had passed, said, “I was chatting with him just a week ago, we were joking about him not getting a paycheck unless he’s sworn in to serve as the Western District Governor.

“He’s a dear friend and someone who would disagree with me on certain issues and that’s a sign of a great leader, someone who is not afraid to speak his mind and make hard decisions. He will be sorely missed,” said the governor in a phone interview. The governor expressed his condolences to Lualemaga’s family.

Pulu Ae Ae Jr., director of Congresswoman Aumua Amata’s local office, said Lualemaga was a vocal leader who raised concerns and publicly spoke out on issues, and he was always a friend of the media.

For example, in September 2015, an alarming increase in drug-related crimes, which led to a shooting of a police vehicle that injured a police officer, caused the Western District Governor to publicly question the village mayors and police on what they were doing to protect their respective villages, during a meeting of all traditional leaders.

Lualemaga said the reason that these problems continued in the territory was because village police and mayors are not doing their jobs.

“That is Lualemaga,” said, Pulu.

“He was also one of the best golfers I know,” he said. “He’s indeed a pillar of this community who will be missed.” Pulu also expressed condolences to the mourning family for the loss of a great man.

During Lualemaga’s time as senator, he chaired the Senate Select Investigative Committee (SSIC) and prompted a Senate Committee to come up with a rather unusual recommendation. The Committee wanted the police and Customs officers to submit to a polygraph test every six months, which they claimed would help minimize the potential for bribes in the territory following the increase of violent and drug related crimes in 2012.

Lualemaga said this test would be a better check and balance and also called for an independent Public Safety Commission.

In 2015, Lualemaga, who was serving as Western District Governor, urged the United Nations Decolonization Committee to delist American Samoa from the list of UN colonies, saying that problems between American Samoa and the U.S. are resolved between the two parties and not with the UN.

He thanked and expressed appreciation for “the wisdom of our forefathers who signed the Treaty of Cession in 1900 for Tutuila and in 1904 for the Manu’a islands. That’s the reason I stand firm and keep the wisdom of our forefathers for giving American Samoa under the control of the United States,” he said, adding that their foresight and wise consideration is continuing "our good relationship with the greatest nation, the United States of America.”

According to Samoa News archives, Lualemaga during the Paris attack in 2015 wrote to France’s President Francois Hollande and the French people expressing his condolences.

“After hearing of the evil attacks upon your people and nation, I, Paramount Chief Lualemaga E. Faoa and my people in A’asu village and people of American Samoa, are extremely saddened to hear and learn of such uncivilized acts towards your peaceful and loving people.”

Lualemaga also made Hollande aware that he’s from A’asu the resting place of the twelve French sailors who died and are buried in A’asu. They “are well preserved and still part of our everyday lives from December 11, 1787 until now in 2015 - 228 years ago.” (A monument is in A’asu in memory of the French sailors.)

Lualemaga is survived by his wife Jessie, children and grandchildren.

Funeral services have yet to be announced.