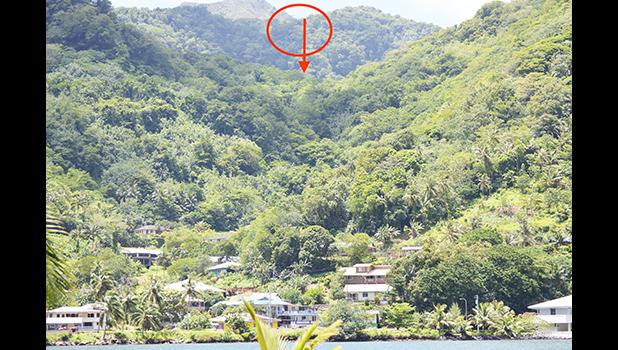 Pago Pago, AMERICAN SAMOA — A plan to use a large piece of land belonging to the Mageo family on the hillside area of Pago Pago known as Happy Valley or Autapini as the site for a new correctional facility has now been halted.

A Mageo family meeting was held this past Thursday to discuss the issue and according to family members who spoke to Samoa News, the family has agreed not to build a new prison on the hillside on the family land.

Family members said that the meeting was calm and cordial and everyone has been praying for God’s Spirit to help with the family situation.

Another family member told Samoa News that the Holy Spirit was in the midst of the discussion and it was a peaceful meeting where everyone spoke about the importance of bringing up any issues to the floor for discussion instead of letting one person make the decision for the whole family.

In response to the family Sa’o’s comments about the ongoing discussion with the government about the new correctional facility and the matter being discussed between himself and a few elders of the family, other family members have their own views regarding this issue on hand.

One family member said, “A few elders don’t represent the majority of the family” and anything that has to do with family land, every member of the family has the right to know and understand it.

“We’re glad that the issue is now finalized and the proposed plan for a new TCF is officially denied by the family. However, there are things that our family Sa’o needs to understand more about his role as the Sa’o of the family,” a family member said.

According to family member, he fully agrees that every Sa’o has a responsibility to the Family, but it affects other surrounding communal lands that border Mageo land, which is why the Pago Pago Council has the right to protest against the plan.

“I disagreed with our family Sa’o comments in Samoa News last week saying that the community including the Pago Pago Village Council has no right to involve or to interfere with anything that has to do with our family land. Our family Sa’o would be prudent to learn a lesson from another matai of the village who was dismissed from the village few years back for not complying with village rules and regulations.”

“My advice to our family Sa’o, please, do the right thing and decide which way you walk, as High Talking Chief for Pago Pago Village Council (PPVC) and Sa’o of our family or a Servant of God as Rev. Patolo Mageo. You can’t serve two gods (masters) at one time.”

Some village members thanked the Mageo family for stepping up to oppose the proposed plan for the relocation of the TCF to Pago Pago.

According to one member of the PPVC, although the Mageo family owns the land, the village council, the people of Pago Pago and perhaps the Maoputasi district should have a say in this matter.

He pointed out, “The Mageo family is part of a community — it’s part of the ‘Afioaga o le Maoputasi;’ and an imposing project as such may not sit well with the village. To ignore the village’s collective faautautaga may be a sign of disrespect, according to the Samoan culture.”

According to the member of the PPVC, there are a lot of issues that need to be discussed regarding this proposed plan. Another concern is the environmental impact of a major construction project on the hillside of Pago Pago.

“Has ASG assessed the impact of the project on indigenous species and forestry, and issues such as landslides and soil erosion?  AS-EPA and other government agencies must look into this project to make sure local and federal laws protecting the environment are enforced,” the member of the PPVC said.

A concerned citizen also offered comments regarding this issue. The individual posed a question to ASG and asked why the government needs to build more prisons when they can spend money on more productive projects such as infrastructure development, schools, research and development, business entrepreneurship projects, public works development, send workers as seasonal worker overseas — there’s a lot more to do. What about a drug treatment facility?

“Prison is negative social engineering. It focuses on punishment exclusively and not on positive outcomes for social moral and ethical development,” the concerned citizen said.