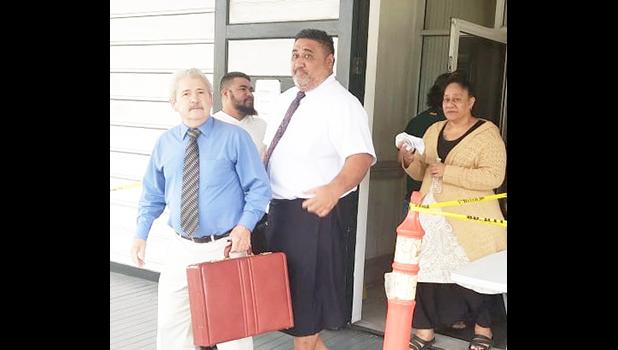 Pago Pago, AMERICAN SAMOA — Before the six-member jury delivered their “not guilty” verdict in the government’s case against Tumuatasi Lefatia last week, attorneys from both sides presented their closing arguments to the jury in an effort to persuade them as to what the verdict should be.

Attorney for the government, Assistant Attorney General Lillian Langford told jurors that on Sept. 12, 2018, the defendant was a dealer who helps in growing the drug epidemic that is poisoning many lives in the community.

However, private defense attorney Marcellus Talaimalo Uiagalelei told members of the jury that his client was arrested because she was sleeping next to a black pouch containing drugs.

Before parties were given the chance for their closing arguments, Acting Associate Justice, Elvis P. Patea accepted 7 exhibits as evidence for the trial. Exhibits 1-6 were evidence the government presented to prove their case.

The 7th exhibit was the evidence the defense presented. It was the draft sketch of the LE AUTE Sports & Bar compound in Malaeloa, drawn by Mr. Faafetai Lefatia, the husband of Tumuatasi and one of the two defense witnesses.

Langford, who echoed Soule’s earlier statement about the “drug epidemic” that is poisoning the community told members of the jury during her closing argument that Lefatia was a drug dealer on Sept. 12, 2018 and was part of the  “drug epidemic” that is poisoning many lives. She, along with other drug dealers are the beneficiaries of the money made selling illegal drugs which affects many lives.

She reminded jurors that their duty is critically important because they have to make sure American Samoa is a safe community.

Langford told members of the jury that the government has presented enough evidence to prove their case against the defendant and that the black pouch containing methamphetamine and marijuana found on the dresser inside the room where Lefatia was sleeping — belonged to the defendant.

The question was whether the defendant had knowledge of the illegal drugs inside the room or not and whether the drugs were under her control.

Langford told members of the jury that according to testimony from two detectives, they stated that on the morning of Sept. 12, 2018, they executed a search warrant looking for weapons and ammunition at the defendant’s home. When they entered the room, they found the defendant with several children sleeping in the room. Inside the room was a dresser, located on the side of the bed where the defendant was sleeping and on the dresser was a black pouch containing illegal drugs.

Langford said Special Agent Justin Thompson asked the defendant if she owns the black pouch and her response was, “Does it have my name on it?”.

The government said the defendant had knowledge of the drugs inside her room and that’s why she kept both doors to the room closed to prevent anybody from entering the room.

She said Detective Jimmy Tagata, who currently works as Court Marshal testified that they forced their way into the room, damaging one of the doors, because the door was locked.

The government’s attorney further told members of the jury that off island experts also testified that the substances found at the scene were methamphetamine and marijuana.

She told the jury that the defense would try to convince them that the drugs were never found in the defendant’s possession. Langford said possession does not mean you have it on you.

“Possession is when you have control of something,” Langford said.

She said that if you used your phone to call someone while cooking dinner, you then place your phone on the table and go to wash your hands, you still have possession of your phone. So, possession, according to the prosecutor, “is when you have something under your control and you knowingly knew about it.”

Langford told members of the jury that the evidence showed that not only drugs were discovered inside the room when officers executed a search warrant, but paraphernalia were also discovered during the raid such as 33 empty stamp-sized baggies, commonly used to package meth; cut up straws and also 3 stamp-sized baggies that had a very small amount of white crystalline substance inside.

Her husband also testified that “it’s our room”, so the room where she was sleeping, according to the government, “belonged to the defendant.”

Langford also stated that the defense would claim that there were other people that ‘come and go’ inside the room such as the guys that manage the pool tables; the defendant’s husband and children; and even women from the village who came for shopping or hung around while their husbands were playing pool, and that’s why both doors remain open 24 hours a day.

Langford told members of the jury that those claims were not true.

“How can a mother allow other people to come inside the room where she was sleeping with her 12-year-old daughter and five grandchildren?” Langford asked.

“How can a mother sleep in a room with her children knowing that drugs were inside the room?”

Langford said the defendant’s demeanor on the morning when cops raided her home proved that she had knowledge about drugs inside her room. She was calm.

“On Sept. 12, 2018, the defendant was a drug dealer,” Langford reiterated to jurors, adding that their job is to help to protect the community from this drug epidemic that is poisoning many lives and destroying many families — by finding the defendant guilty on all four charges.

“And that’s why we’re here today (last Thursday) because things aren’t always what they appear to be,” Uiagalelei said.

He reminded the members of the jury that the government kept using the phrase “drug epidemic” throughout the whole trial.

“Their motive is to arouse you; to get you upset and to make you sad about this mother, so that you will return with a guilty verdict against her.”

Uiagalelei told the jury that everyone has a different duty to perform in the community.

“That’s why my client keeps both doors open at all times because people need access to the room for many reasons such as using the bathrooms or the guys who manage the pool hall to get the tools needed for the pool hall,” Uiagalelei said.

According to the defense attorney, there was contradictory testimony by government witnesses about the door.

“So the fact is, there is no evidence to prove the door was locked,” Uiagalelei said.

About his client’s demeanor, Uiagalelei stated his client was calm when cops entered her room with guns pointing at her and her children. He said that Lefatia was calm knowing her children would not be harmed by the cop’s guns. She never resisted when cops searched her room.

“She was very cooperative, according to Det. Tagata’s testimony,” Uiagalelei said.

“Does that sounds right to you — if someone has something to hide when police entered her room? Her behavior is consistence with someone who believes that nothing illegal is hiding inside her room.”

About the defendant’s reaction when officers asked her about the drugs inside the black pouch, and her response, was, “Does it have my name on it?”, Uiagalelei told members of the jury that is the reaction of someone who just woke up.

“My client never took ownership of the black pouch containing drugs. You heard her testimony that she was scared and afraid when she woke up and saw police with their guns pointing at her and her children.”

“When I asked her on the witness stand if she owns the black pouch, she looked you in the eye and said, no,” Uiagalelei said.

In conclusion, Uiagalelei told members of the jury that no evidence proved that his client was in possession of the bag containing drugs nor had she knowledge about the bag sitting on the top of the dresser.

“Lefatia was arrested because she was sleeping next to the black pouch containing methamphetamine and marijuana,” Uiagalelei concluded.