Man allegedly threatens to chop up neighbors with a machete 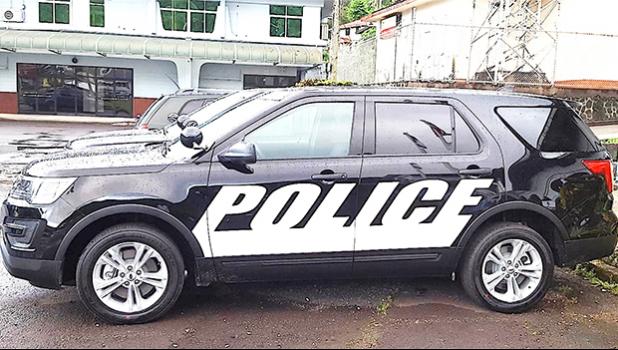 Pago Pago, AMERICAN SAMOA — A young man who was released by the District Court on his own recognizance a few weeks ago after he entered a not guilty plea to disturbing the public peace and 3rd degree assault is back in court for the same thing.

He entered a not guilty plea during his initial appearance in District Court this past Monday, where Judge Fiti Sunia set bail at $500. If he is able to make bail, Faumuina is ordered to stay away from where the alleged incident took place, be a law-abiding citizen, and remain sober.

The government claims that police got a call for assistance during the early hours of Sunday, July 29, 2018 from a concerned individual, regarding a man allegedly throwing rocks at their residence, shouting out loud (Samoan war cry), and yelling profanities.

When they arrived at the scene, responding officers say the defendant was walking towards the police unit yelling profanities at them. Faumuina appeared to have blood pouring from his head onto his face, his hair covered with blood and debris.

As cops were trying to exit the police vehicle to apprehend him, Faumuina immediately fled the scene. A few moments later, he was captured.

When they were putting the handcuffs on him, Faumuina continued to yell profanities and threaten the officers saying in Samoan, “kakala loa a’u i kua ou ke fasiokia uma oukou” (when I am released, I will kill you all.)”

Faumuina was placed into one of the police units but he continued to resist.

The EMS was dispatched to the Tafuna Substation to treat the defendant's injuries, sustained at the scene. The government claims that throughout the ordeal, Faumuina reeked of alcohol.

When questioned by police, the victim said they were asleep when they heard a rock hit the roof of their home. A little later, a big rock landed in their living room. That's when her father and brother walked outside to look for the culprit and found Faumuina hanging out near their home. He was yelling profanities at the victim's brother and dad.

The victim told police that her brother called out to Faumuina, asking why he was yelling profane words to his dad. The victim said that's when she intervened and told her brother that she would handle the situation. She said she ordered her brother to go home.

The victim told investigators that Faumuina continued to yell profanities in front of their home, and then threatened her, saying he was going to come over and cut her with a machete, and chop everyone up.

Upon arrival at the Tafuna Police Substation, cops reported that Faumuina continued to resist and mouth off at them.

When the paramedics arrived to treat Faumuina, a request was made to transport him to the LBJ Hospital for further treatment, due to the seriousness of his head injury. Faumuina was escorted by two officers. One was with him in the EMS unit, and the other followed in a police unit.

The defendant was treated and released.

But he didn't return to where the police officers were waiting.

Instead, he ran towards the ER waiting area and attempted to flee.

Faumuina was captured and placed inside a police unit where he continued to resist and cuss. He was booked and held at the Territorial Correctional Facility until the next sitting of the District Court, which was Monday this week.

Samoa News points out that Faumuina has a pending case in District Court, for disturbing the peace, He and some juveniles got into a fight at the Fagatogo Market.