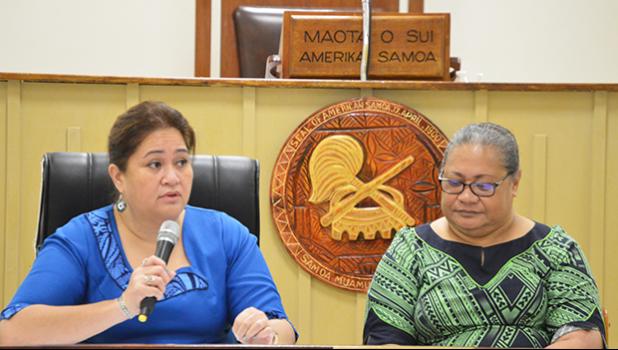 DBAS prez says this is due to no report on assessment of damages
By
Ausage Fausia
ausage@samoanews.com

Pago Pago, AMERICAN SAMOA — Residents of Manu’a whose homes were damaged due to Hurricanes Vicky and Wasi, and who applied for loans from the Development Bank of American Samoa have not received any assistance to date.

This was the statement by the President of the Development Bank of American Samoa (DBAS) Dr. Ruth Matagi-Faatili when she appeared before the House Government Operations Committee last week to testify on the status of their assessment on damages from the two hurricanes and also other issues relating to the DBAS service such as loans for members of the community.

When asked about the reason why people of Manu’a have still not received any assistance, Matagi-Faatili said that reason is because bank inspectors have not been able to do an assessment of the damaged homes.  This is the same for homes that were flooded or suffered wind damage during the hurricane events earlier this year.

She further stated that she requested that DBAS be part of the assessment teams from the Department of Homeland Security (DHS) and Public Works (PW) to visit Manu’a, but there was no response.

The president of the DBAS stated that because of the coronavirus pandemic, which suspended regular flights to Manu’a they were unable to send their teams to Manu’a to conduct their own assessment for the damages. So she requested that Public Works have staff in Manu’a conduct the assessments.

Matagi-Faatili said that the reports, which were submitted of the damages in Manu’a did not have details needed by the bank for evaluation, such as the costs of damages and the household contents that were destroyed or damaged. She assured members of the committee that they would do the evaluation for all the damages once an assessment is carried out and completed.

Speaking about the assessment carried out by inspectors from DHS and PW, the DBAS president said the assessment reports for the whole territory from Hurricane Gita show that 114 homes were destroyed or significantly damaged and the total cost needed to replace or repair the homes was $511,000.

Out of the whole total, DBAS received only 10 loan applications of which one has been approved and one is waiting for approval of an amendment that DBAS has proposed for HUD funded loans. The bank president said because the extent of damages from the hurricane did not meet the threshold for a presidential disaster, the amendment is needed in order for US Housing an Urban Development (HUD) funding to be applied to such loans.

Two of the loan applications are from Manu’a.

Manu’a representatives were amazed that after all this time the bank still hasn’t been able to send an assessment team to Manu’a to do the assessment of what was damaged.

Vice Speaker of the House and Manu’a #1 Representative Fetu Fetui Jr said the decision to let inspectors from the DHS and PW conduct the assessment for people of Manu’a was a poor one, “and I don’t agree with what you did,” adding that the bank inspectors should conduct their own assessment and submit their own report before they do their evaluation.

Matagi-Faatili responded by saying that the reason they sought assistance from DHS and PW inspectors was because they already had offices and employees in Manu’a.

Fetui Jr fired back saying that if bank inspectors are not available to do the assessment, Manu’a Representatives can do the job because that is one of their many responsibilities.

“It’s almost a year now but my people are still waiting for financial assistance to rebuilt their homes and move on with their life. This is not the first time my people are treated like this and I know for sure that Manu’a people are still underserved,” Fetui Jr said, noting that the bank president’s explanation is a poor excuse.

He advised the Matagi-Faatili not to depend on Public Works inspectors to do the assessment but to try and get their own team to Manu’a.

He said he doesn’t want to repeat what Vice Speaker had just said but to him as a representative of Manu’a, the people are in need of financial assistance to rebuild their homes and move forward.

He said that many have complained that they wait ages for their loans and some give up due to the litany of requirements.  He asked about why the bank is even requiring a life insurance policy.

The bank president said the life insurance policy of the loan applicant is required for new home loans and this will ensure payment of the loan in the event of death and not burden survivors or those living in the home.  It would also allow the survivors to maintain good credit and qualify for DBAS loans themselves.

During last week’s hearing, it was decided that the directors of Public Works and HLS would be called in to explain the delay in inspecting damages of homes in Manu’a.

One of the issues also discussed during the hearing was the status of loans at the bank.

When asked by Vailiuama, Reps. Larry Sanitoa and Faimealelei Anthony Fu’e Allen, the bank president said that the bank is trying to collect a total of $4 million in write off loans, which were in the bank’s portfolio before the current management took over. Write off loans are those for which the bank is not charging any interest. She said a division of the bank called loan recovery is collecting payments from these write off loans.

When Sanitoa asked about the total in write off loans, Matagi-Faatili said as of June, DBAS’s total loan portfolio was $20.5 million.

Sanitoa said $4 million in write off loans is quite substantial. He said that many families in his district of Tuala-uta need financial assistance to repair homes and contents damaged by constant flooding.  He asked the DBAS president if the HUD loan program or any other loan source was available for affected families to apply for.

The bank president said there’s been an amendment to the HUD loan program to allow loans for home repairs and there’s also the DIRECT loan program that can provide loans of this nature.

The Tualauta representative reminded the bank president that DBAS is required by law to submit its audit report to the Fono in March of each year, and pointed out that it’s been awhile since he’s seen an audit report for DBAS.

Fofo representative Andra Theresa Samoa voiced her frustration over the total of loan applications the bank approved compare to the total of 114  families that applied. She said that most of these families are poor and the only reason they applied for loan assistance was because they couldn’t afford to rebuild their homes on their own.