Manumalo graduates 8 Flames —all on to bigger and better things 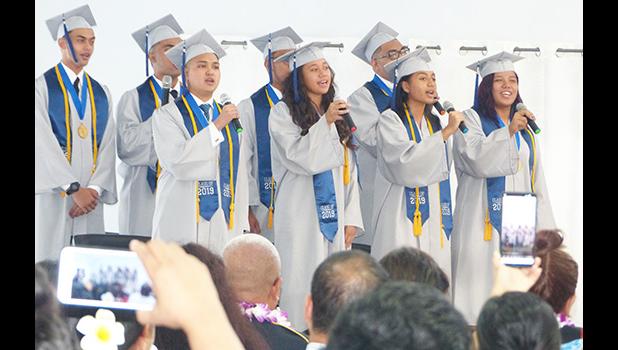 Pago Pago, AMERICAN SAMOA — The chapel at Manumalo Baptist Church was full of smiles — and tears — as parents, family members, and friends gathered yesterday morning to witness the graduation of eight seniors, the Class of 2019.

Paramount Builders, a local company, prides itself in promoting education and honoring the achievements of the territory’s youth with this year’s sponsorship of graduation coverage.

This year, the highest honor went to Hewlitt De Lara — class valedictorian — who received a $104,000 scholarship to attend the University of Portland.

The salutatorian honor was shared by Aitulagi Alofa and Ben Schuster, the only two local high school students who will be heading out to United States Military Academies: the Naval Academy for Alofa and the Air Force Academy for Schuster.

Those in the audience yesterday were treated to inspiring poems and beautiful songs, performed by the graduates. It was De Lara and Alofa who spoke on behalf of the graduating class.

Director of Education, Dr. Ruth Matagi-Tofiga, in her remarks, spoke highly of Manumalo Academy students, and their academic achievements, especially the graduating class. She said the group consistently took top honors in territorial high school competitions, and based on tabulations by DOE, Manumalo High School students tend to top the ranks.

She also pointed out that the 8 graduates have been offered nearly $1 million worth of scholarship awards from various colleges and programs.

In his remarks, Manumalo Academy director Papalii Laulii Alofa said the achievements of the Class of 2019 are the highest ever in the school's history — raising the bar to a higher level — and the success is the result of the government, especially DOE and private schools, working together to reap better results.

He also thanked the parents of the graduates, who forked out thousands of dollars each school year in tuition costs, and said he hopes they are satisfied with how their hard earned money was spent.