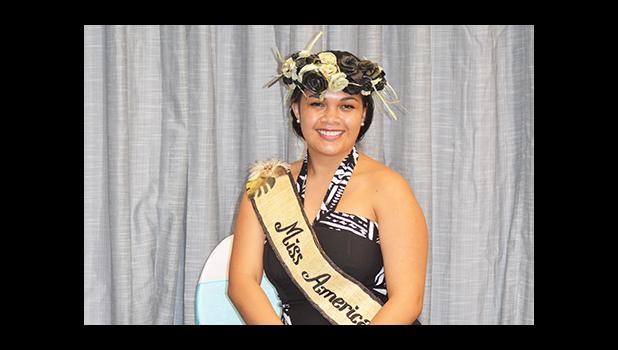 Apia, SAMOA — “Antonina has made all of American Samoa proud, because it’s been a long time since we (American Samoa) have had such a high placing in the (Miss Pacific Islands) pageant, for the longest time and its something to be proud of,” said Meafou Imo, President of Miss American Samoa Inc.

She told Samoa News last week, after the pageant, that all the glory is to God for his tremendous love and care since their group arrived in Samoa.

Miss American Samoa, Antonina Lilomaiava, was first runner up and she won Best Sarong and also the National Tourism Award.

Mrs. Imo pointed out that this year “we have an awesome support group” from the Governor and Lt Governor of American Samoa, the government, to the people, families and friends of Antonina and all those who assisted with preparations of Antonina, we can’t thank you enough.”

She said that Lolo and the first lady Mrs. Cynthia Moliga, along with Lt. Gov. Lemanu Peleti Mauga’s support for Miss American Samoa speaks great volumes and it was very fulfilling to know that the government leaders are very supportive of Miss American Samoa.

She also told Samoa News, during an interview after the awards ceremony held on Saturday, Dec. 3 (Samoa Time) that this year they did something different — “instead of bringing just myself and Antonina, we brought with us our local designers.

“These designers are the ones who assisted in the local pageant that won different categories. They were invited to help and put all their work into the Miss American Samoa in her bid for the Miss Pacific Islands and although we didn’t get the title, we made it to the top,” Mrs. Imo said.

According to the MASI president, it was Moesha Bird and Martha Asalele who worked on the traditional wear, while the makeup artist was Andrea Pa’a, and Will Thompson and Okenaisa Fauolo wrote the script for Antonina’s talent.

She also commended Shiki Leaupepe and her assistant Paul Saulo for the idea of the “Samoan Barbie” — the concept that served as the springboard for the sarong category, which Antonina won.

She further commended their very own photographer Faith.

“It’s not an easy job to put all these categories together, and while MASI was responsible for the outfits, we utilized the expertise of the talented group we have and we made it to the top two,” she said.

Mrs Imo told Samoa News that she’s very proud of Antonina and her accomplishments in being one of the youngest to compete in this regional pageant and coming in second place is something to be proud of.

She sent out a special thank you and appreciation to the CEO of SSAB — Fiti Leung Wai  — for all her support and for lending a helping hand to Antonina’s success at the Miss Pacific Islands pageant. SSAB- Pago sponsored Antonina for the MASI pageant, and continues to support her during her reign as the 2016 Miss American Samoa.

In the Sarong category, Shiki told Samoa News that the concept they had in mind was the “Samoan Barbie”. She said that through the prehistoric times when the human race was first born, to the modern times, Polynesians and artists have used the human body as an innovative canvas to showcase the human body like no art style before it and the idea that archaeologists have evidence to support is that body painting was the first form of art used by humans before tattoos.

She said with the rapid rise of human civilization, the art form has evolved and Samoans still manage to hold on to their art and their love for the Samoan culture. Shiki said that through her sarong, Antonina embraced the Samoan people's love for their art, dance, and way of life in a contemporary piece.

In an interview, after the awards ceremony on Saturday, Antonina told Samoa News that it’s been an awesome journey and she’s definitely happy and honored to be working with her team of “awesome people.” She noted how thankful she is to have the support of American Samoa as a whole, the government leaders and also her family and friends.

“Words are not enough to express my heartfelt thanks to Meafou and our great team for everything they have done,” she said.

Antonina also has a message for the young women who want to take up the challenge.

“Always look to God for your purpose and look at Him for courage as it’s not easy — as the weight you carry in representing American Samoa is huge. Also be yourself and remember the values that you were taught while growing up in your home and church; and don’t be afraid to take up the challenge.

She is the daughter of Talitiga and Koreta Vito Lilomaiava, and is a student at the American Samoa Community College, majoring in business prior to being crowned Miss American Samoa. She is currently employed by American Samoa’s Visitors Bureau.

Antonina is a devoted member of the Catholic Parish Church in Aua.

She told Samoa News earlier that she hopes to gain more experience and take it back home and share this empowerment with the young women in American Samoa.

“Its not all about beauty, heels and the glittery stuff, it’s so much more than that; and I am fortunate to have had this opportunity to be a part of this, especially that it’s the Pacific Islands pageant — 30 years. Ten years from now I can look back and say that I was part of... this and we made history being participants.”

The next Miss Pacific Islands will be held in Nandi Fiji next year.