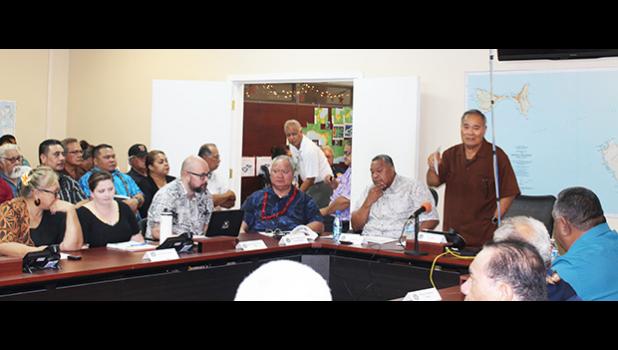 Lolo made the direct-verbal request to ASCC president Dr. Rosevonne Pato at Sunday’s cabinet meeting. Pato responded that the ASCC board of higher education will be meeting today (Tuesday) and this matter will be discussed. She said there’s also the usual “pinning ceremony” for student nurses who are graduating.

The governor insisted that the graduation be moved back to another date, especially now with the measles outbreak. Lolo informed cabinet members that all scheduled major activities on the calendar that involves large gatherings be cancelled or postponed. For example, the annual Arts Council Christmas program set for Dec. 15-17 is now canceled.

He said plans are still moving forward for ASG agencies designated to areas of the territory to put up Christmas decorations. He urged them to ensure that the spirit of Christmas, in the midst of a measles outbreak, continues to bring happiness to the community.

The governor is calling on the community, including church and village leaders, for their support during the outbreak. In his emergency declaration released Sunday, Lolo called on all village councils to enforce curfews and discourage public gatherings at this time. He said airlines serving the two-Samoas must comply and work with the government to ensure that the new travel restrictions — affecting Tonga and Samoa — are adhered to.

“In light of the Governor’s State of Emergency Declaration,” ANZ Amerika Samoa Bank closed its Fagatogo branch yesterday and again today, according to a brief notice sent out by the bank’s Country Manger, Tasi Scanlon.

The notice states that the Tafuna branch remains open at normal hours and all ANZ staff are to report to work. “Staff members who are at high risk — pregnant mothers and/ or staff members who have not been vaccinated — are to call your line manager immediately and stay home,” said the notice.

Provisions of the governor’s declaration state that all children one-year-old and younger and “all pregnant women should stay home but keep prenatal care appointments as scheduled.”

Scanlon, in the notice, encouraged “all of our valued customers to make use of our ATMs, EFTPOS machines, Night-bag Depository and Online Banking and avoid coming into the branch. Thank-you for your patience and continued support.”