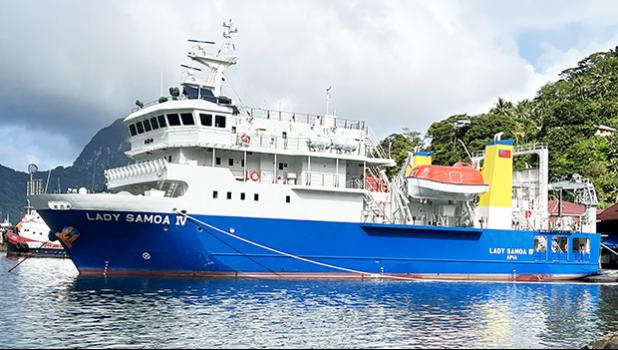 Secretary of Samoa Affairs Mauga T Asuega cuts the ceremonial ribbon at the official launching of Samoa’s new MV Lady Samoa IV on Friday, Nov. 18, 2022. Guests to the event at the interisland dock got a chance to tour the vessel, which will now service the Pago-Apia route. It replaces the MV Lady Naomi that will be utilized for sailings to Tokelau. [photo: faaTalanoa]

Funded by Japan’s grant assistance program at the tune of WST$66.7 million tala, the MV Lady Samoa IV boosts impressive features including air-conditioned seating areas with reclining seats, a restaurant with large flat screen TV, a VIP room, elevator, and a spacious vehicle deck. On top of the outside seating area are solar-panels helping with the vessel’s power needs.

Guests at the official launching of the MV Lady Samoa IV inspect the restaurant area inside the new MV Lady Samoa that will be serving the Pago-Apia route. The restaurant is air-conditioned and has a large flat screen TV. [photo: faaTalanoa Media]

A look at the outside seating area of MV Lady Samoa IV which is replacing the MV Lady Naomi to serve the Pago-Apia route. The roof has rows of solar-panels that helps provide power needs for the Samoa vessel. [photo: faaTalanoa Media]

The MV Lady Samoa replaces the MV Lady Naomi which has been servicing the Apia-Pago route for more than two decades. Representatives of the America Samoa Government and Samoa as well as members of the private sector attended an official launching ceremony for the new vessel on Nov. 18, 2022.

Directors Petti Matila (Commerce) and Ti’alemasunu Dr. Mikaele Etuale (Procurement) pose for a photo at the top deck of the Samoa new MV Lady Samoa IV, which made its maiden voyage to American Samoa on Friday, Nov. 18, 2022. The two cabinet members were among ASG officials who attended the launching of the MV Lady Samoa IV on Nov. 18 at the interisland dock in Fagatogo. [photo: faaTalanoa Media]