With Samoa allowing flights into the country for citizens stranded in N.Z and easing stay at home rules, I think America Samoa should ...
Do the same
33%
Only ease stay at home rules
13%
Keep things the way they are
54%
Total votes: 91
Home

MV Manu’atele II arrives back to Tutuila safe and sound 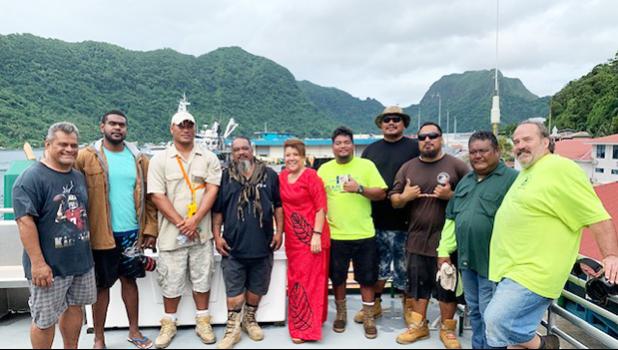 The ASG vessel left last week Wednesday for the Manu’a islands, with plans to head first to Ta’u but instead, went to Ofu Harbor, due to rough weather conditions at the time, as Tropical Cyclone Tino was located far south of the territory.

The vessel sustained damage to the lower part of the hull after it struck part of the Ofu Harbor where it was anchored Saturday, during strong winds and rough seas. Port officials estimate the damage to the hull at about $200,000 but no leaks were identified, although the vessel still needs to undergo an inspection with the U.S Coast Guard. (The inspection is expected to be carried out this week).

Port Administration director Taimalelagi Dr. Claire Poumele said the crew navigated the vessel safely back to Tutuila on Tuesday afternoon, and it took them 5 hours to return home. “The crew were in good spirits and I am proud of the great work they performed during the storm” in Ofu, she said. The Port director credits the crew for the safety of the vessel and its return back to Tutuila.

Videos and photos posted on the Manu’atele Community Worldwide Facebook page shows damage to part of Ofu Harbor. Cargo that was on board the vessel was unloaded after the storm passed the Manu’a Islands, using another side of the dock that was not damaged, according to the Facebook post. No injuries were reported.