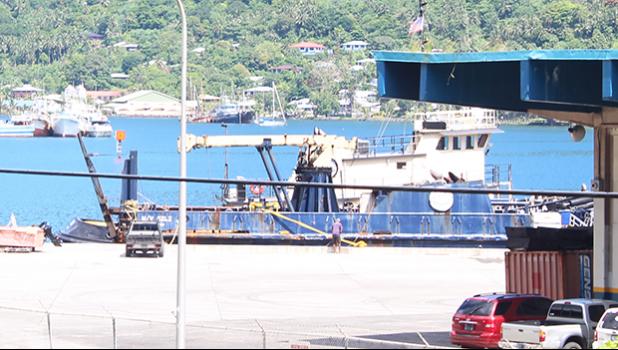 Pago Pago, AMERICAN SAMOA — The government’s multi-million-dollar vessel, MV Manu’atele, is in “full operation” transporting passengers and cargo between Tutuila and the Manu’a islands, while the other ASG-owned vessel, MV Sili, is awaiting repairs to be carried out some time this week.

In the early afternoon of Saturday, Feb. 16th, the MV Sili — while docked at the main pier at the Port of Pago Pago — took on water in the engine room, but didn’t sink. The US Coast Coast,  Port Administration officials, and others worked to stabilize the vessel and remedy the situation. No crew or passengers were on board at the time.

Responding to a Samoa News request for comments and an update, Port Administration deputy director Christopher King said last Friday morning that during the late evening of Feb. 16th, “after pumping out the water, we discovered a small hole in the hull beneath the engine room.”

He said “temporary repairs” were completed Sunday morning, Feb. 17th, by local diver Sean Gregg of Atlantic Pacific Marine Inc., “who was also called to assist with the underwater survey and to supply pumps, salvage equipment, and expertise to mitigate this incident.”

“More permanent repairs are scheduled” for this week for the MV Sili.

With the MV Sili out of service, Samoa News asked regarding the status of the MV Manu’atele, in providing service for the Manu’a islands. King revealed that the MV Manu’atele “has been in full operation” since more than a week ago.

The vessel departed Manu’a “on a non-scheduled trip carrying both passengers and cargo” on the evening of Feb. 15th and returned the afternoon of Feb. 17th, he explained.

And then last Wednesday, Feb. 20th, the MV Manu’atele resumed her regular sailing schedule, taking both passengers and cargo to Manu'a. She returned last Friday afternoon.

According to the Port deputy director, the MV Manu’atele will resume its regular bi-weekly schedule and sail every ASG pay week: load and depart on Wednesday night; arrive in Manu'a Thursday morning, and return on Friday.

“On the non-ASG pay week, the vessel is slotted for scheduled maintenance, and if needed, available for charters,” he said.

Samoa Airways has added a second weekly flight to and from Ofu Airport on Ofu island, according to the American Samoa Visitors Bureau.

According to the ASVB, travel bloggers and nature enthusiasts travel from all over the world to make their way to explore the natural beauty of Ofu island, which has been described as “America’s best kept secret,” but access by air to Ofu was limited to a weekly flight on Thursdays.

A second flight now operates on Tuesdays and there has been calls by lawmakers, ASG officials, and Ofu residents for a possible increase of flight frequency to Ofu by Samoa Airways, which operates four weekly flights to Fitiuta Airport on Ta’u island.

The Samoa government owned airline is operating the territory’s domestic air service, under exemption by the US Department of Transportation due to the lack of a US carrier to provide such service.