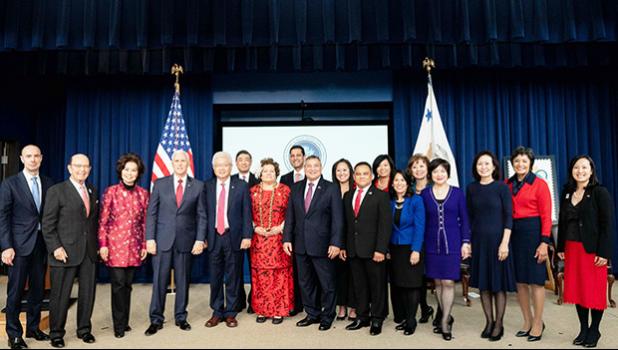 This is the first time that there were three Cabinet members present for the swearing-in of the Commissioners with the Vice President. In addition, the special new postage stamp commemorating the Year of the Golden Rat was unveiled by Chairman of the U. S. Postal Service Board of Governors Robert M. “Mike” Duncan at a special stamp dedication ceremony.

Vice President of the United States Mike Pence said, “This year we’ve got a lot to celebrate. I’m proud to report that under the leadership of President Donald Trump, Asian Americans are prospering like never before. The American economy is soaring and Asian Americans are driving capital investment and growth and job creation in cities and towns large and small all across the land.”

U. S. Transportation Secretary Elaine L. Chao said, “We look forward to the work of this Initiative and Commissioners to further the advancement of opportunities for Asian Pacific Americans.”

U. S. Commerce Secretary Wilbur Ross said, “It was my pleasure to participate in today’s Lunar New Year celebration with everyone involved in the newly re-established White House Initiative on Asian Americans and Pacific Islanders. We look forward to working with all of you in building a prosperous future for everyone in this wonderful community.”

U. S. Labor Secretary Eugene Scalia said, “The coming of a New Year is an occasion for renewal, a chance to look with excitement and optimism toward the future. We have much to be optimistic about, including our strong economy and the opportunities it’s providing American workers. Over this past year we saw not only the lowest unemployment in 50 years, but also the lowest unemployment ever for Asian Americans. I wish all an even more prosperous year to come.”

Chairman of the President’s Advisory Commission Dr. Paul Hsu said, “There are so many things we can and should do for our community to bring the opportunities and prosperities to Asian Americans and Pacific Islanders, helping them to realize achieving the American Dream is possible for everyone.”

“The Postal Service is proud to join Asian Americans and Pacific Islanders to celebrate the Lunar New Year by unveiling our newest stamp,” said Chairman Duncan. “U.S. postage stamps help our nation celebrate its diverse cultural heritage, and we are grateful for the opportunity to mark this important holiday and its traditions.”