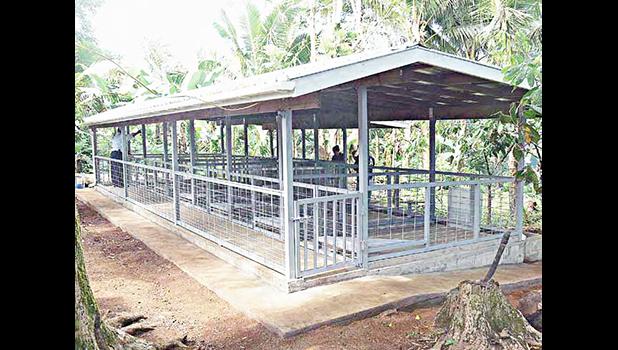 “Farming is not a hobby it’s for a life time,” local farmer says
By
Ausage Fausia
ausage@samoanews.com

Pago Pago, AMERICAN SAMOA — The Director for the Department of Agriculture (DoA), Solialealofiotagaloa Iosua Tasi Mutini is planning to present a proposal to Gov. Lemanu P. S Mauga to advise him on the need to build a slaughterhouse for pig farmers in the territory.

This was revealed by Solialealofiotagata during a hearing with faipule a few weeks ago. He told members of the House Agriculture Committee that in American Samoa a size 2 pig is the most coveted size of pig that everyone wants, however, once the pig passes this level, the next move by pig farmers is to use the big pigs for faalavelave.

As the Agriculture Department moves to increase local agriculture production for — among other things — the slaughterhouse, enough taro supply and to ensure food security, faipule say the territory continues to face many difficult challenges due to its remote location and limited natural resources.

There are a total of 104 registers pig farmers currently in the territory and DoA is working together with the local farmers to make sure they have everything they need for their pig farming.

Committee members agreed with the plan. Rep. Vailoata E. Amituana’i stated that pigs play an important cultural and financial role in American Samoa. Due to the lack of native mammals, and space to raise larger animals, pigs tend to be the protein of choice for many Samoan palettes.

Due to the large size of pig operations, farmers in American Samoa build Dry-Litter facilities. Dry-Litter systems utilize organic material and waste combined with the composting process to eliminate all waste produced in pig rearing operation from entering the surrounding environment.

Faipule also said that ASG and local leaders over the years have raised concerns over food security in American Samoa, especially because the territory is dependent on imports. And this was evident from late 2018 to early 2019 and also last year when there was a labor dispute at the US west coast ports, which delayed shipments to the territory.

He stated that DoA must wage a campaign “encouraging families to re-engage in small family agricultural plots for subsistence” as this “will significantly improve self-sufficiency and abate the leakage of local funds through the purchase of imports.”

Committee members told the new DoA director that goals by previous directors were to have local farmers grow crops on local soil to reduce imports. And if local farmers are able to harvest a steady supply of produce such as lettuce, cabbage, and tomatoes, ASG may be able to increase government revenues through future tariff schemes. “There are tariffs currently in place for taro and bananas that are imported from Samoa.

Samoa News often receives reports that consumers are facing difficulties in finding lettuce and tomatoes as it appears that there is a shortage of both imported and locally grown in stores and at small roadside stands.

In order to address the high rate of imported produce from the U.S and Samoa, the committee says DoA has taken steps to encourage local farmers to increase production, and they are offering free consultation services to farmers.

Faipule wanted to know if the DoA still receives its farm subsidy program from ASG to assist farmers with much needed supplies such as fertilizer, fungicides, herbicides, and pesticides at a reduced cost.

The DoA director told the committee that American Samoa has enough taro supplied by local farmers. However, they continue to allow taro from Samoa to be exported to the territory with the limit of 50 packs of taro every two weeks.

Solialealofiotagaloa said that they visit areas where local farmers are selling their taro such as the Market, School Lunch program and also local stores and they observed that a lot of taro is being sold at these places.

Saole Faipule, Titiail’i Kitara Vaiau said that one of the reasons local business owners buy their taro supply from Samoa is the high price of the local product.

Titiali’i said some local farmers told Samoa News that some are taking advantage of the situation and have increased prices to as much as $2.50 a pound. It was suggested that the department try and stabilize taro prices in order to stop the varying prices for taro.

The Agriculture Director said there’s no price control here and the government can’t dictate how much farmers sell their produce for.  But he advised farmers that if they don’t produce enough taro or price their taro too high, people may resort to other staples.

He said, “Look at our children, they don’t want to eat taro.

“They would rather go to McDonald’s or Carl’s Jr, or eat rice and bread.  Only us older folks are eating traditional food,” Titiali’i observed.

Fagatogo faipule, Vailiuama Steve Leasiolagi informed the director that the demand for taro is much higher than what local farmers can supply.

He acknowledged the director for allowing the taro from Samoa but suggested that the Agriculture Department control the quantities and suppliers to weed out middlemen who are responsible for high prices.

He said that some business owners were also concerned that taro from Samoa arrives here with dirt, a carrier for pests and weeds such as vaofefe palagi which he said is now on the increase in the territory.

A local farmer told Samoa News that the latest viruses that attack taro crops are one of the most frustrating problems for farmers at the primary level.

Asked why there were so many different types of viruses occurring, Malae Tafito said quite simply: “Climate change.”

“The latest new virus is called B.L.T. and that one is getting tougher and people are giving up on farming,” said Tafito

According to Mr. Tafito, climate change is affecting the severity and over occurrence of these devastating viruses that kill taros as well dreams.

Aside from working on his taro farm, Tafifo never stops learning in fact some of his recommendations to those who are thinking of dabbling in taro farming involve making a serious commitment to the job.

“Farming is not a hobby it’s for a life time. You have to give everything to it. So I had to do my homework, I had to study and be smart about everything. It has to be precise.”