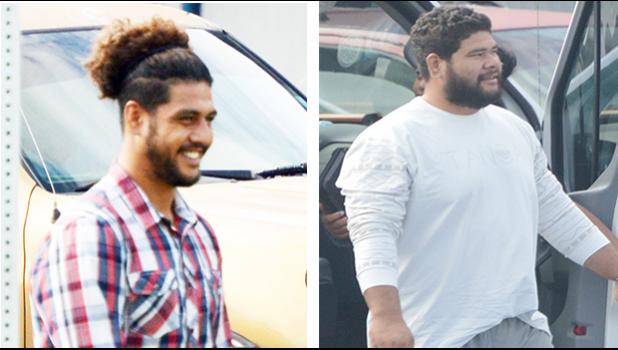 Pago Pago, AMERICAN SAMOA — Two brothers from Pago Pago spent their New Year in the Territorial Correctional Facility (TCF) after cops allegedly discovered drugs in their vehicle during a traffic stop in Nu’uuli.

The brothers, Wayne Jack Banse and his younger brother, Johnny Banse made their initial appearances in District Court last week. They appeared again in court this week for preliminary hearings.

According to the government’s case, shortly before midnight on Dec. 27, 2020 three police officers from the Patrol Division of the Department of Public Safety (DPS) were patrolling the Nu’uuli area when they stopped a vehicle for speeding and broken taillights.

Officers also discovered that the driver of the vehicle did not possess a license and a check with the OMV (Office of Motor Vehicle) system revealed that his driver’s license had been expired since 2015.

The driver was told by officers that the vehicle was impounded due to the driver having no ID or valid driver’s license.

Upon impounding and inventorying the vehicle, officers discovered a hand rolled cigarette with green leaf in it, and a roach of like substance inside the center console, and a neon cut-up straw containing a white crystalline substance (which tested positive for methamphetamine) was found underneath the backseat.

The Vice and Narcotics Unit (VNU) were informed of the discovery for further investigation.

Sgt. Levi Tafaovale was assigned to investigate the matter and he interviewed police officers who initiated the traffic stop for more detail of what happened, along with the two men who are at the center of the criminal investigation.

When asked about the incident, the Banse brother said they wished to remain silent and refused to make a statement to investigators.

Johnny was then booked and his property was inventoried and a simoi baggie containing 11 hand rolled marijuana joints was found in his left pocket. Discovered inside the sling bag was a glass pipe (commonly used to smoke methamphetamine) and loose green leafy substances.

It was during the PX this week when the government called their only witness, Sgt. Tafaovale, the lead investigator in this case.

According to the lead investigator’s statement, he was assigned to investigate a case involving drugs found on two men during a traffic stop. The discovery and the information was given to him and he was able to interview several people involved including the police officers.

It was revealed during the investigation that both suspects were allegedly involved in the matter. The lead investigator further stated to the court that a test was conducted on the discovered substances and tests revealed that the white crystalline substance tested positive for methamphetamine while the green leafy substance tested positive for Tetrahydrocannabinol (THC), an active compound in the controlled substance marijuana.

After hearing evidence of the case, the court was satisfied with the evidence presented by the government and the case was bound over to the High Court for further court proceedings.

Both Wayne and Johnny appeared before Acting Associate Justice Elvis P. Patea for arraignment where they separately entered their not guilty pleas to both counts.

Both defendants were remanded back to the custody of the TCF until they post bond.