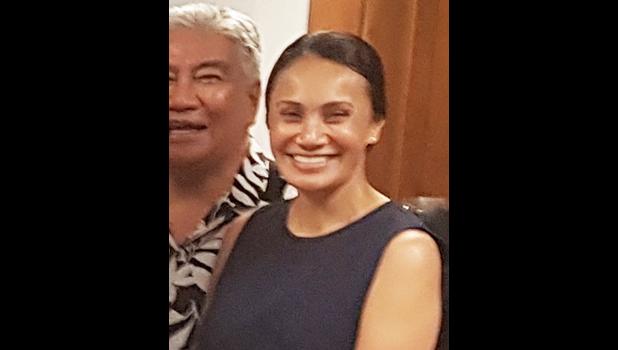 Pago Pago, AMERICAN SAMOA —  The Lemanu Administration’s newly established COVID-19 Task Force includes “At Large” public members. And among them is Ella Gurr, chairperson of the American Samoa Chamber of Commerce, who had requested the previous administration for inclusion of the private sector in their task force but was turned down by former Gov. Lolo Matalasi Moliga.

However, the memo was not publicly released by the Governor’s Office until after 4:30p.m. last Thursday and it came hours after the Health Department news conference, where acting Health director Motusa Tuileama Nua — in response to news media questions about the new task force — says a new task force is in place for the new administration and the chairman is Talauega, who is also the Governor’s Authorized Representative (GAR).

According to Lemanu’s memo, Gurr — along with President of G.H.C Reid Co., Olivia Reid and Ginger Porter with the University of Hawaii are “At-Large” public members. Also from the private sector is Tuli Fruean, Hawaiian Airlines local station manager.

Lemanu points out in his memo that American Samoa continues to face challenges in responding to the COVID-19 pandemic. “For that reason, at the outset of the administration, it is necessary to sustain the efforts of the Coronavirus Task Force,” he said.

The governor offered “deepest gratitude” to the previous task force members for their dedication and service in keeping the territory safe, pointing out that their work resulted in American Samoa “experiencing near unprecedented protection from the disease that has devastated much of the rest of the world”.

The new COVID-19 Task Force, says Lemanu, will assume the responsibilities and authority of the Vaccination and Repatriation Task Forces.

The new task force, chaired by Talauega, was directed by Lemanu to hold their first meeting last week Monday, Jan. 4th at the Emergency Operations Center in Tafuna.

“Your cooperation and support in this critical endeavor is appreciated,” said Lemanu in his memo to cabinet members.

Other members of the new task force: