No run off, Lolo and Lemanu garner over 60% of the vote 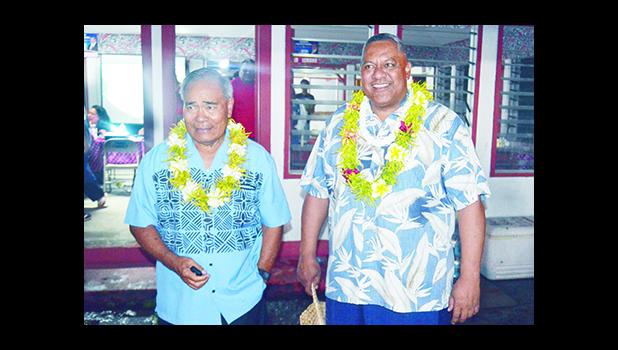 “The Way Forward” team of incumbent Gov. Lolo Matalasi Moliga and Lt. Gov. Lemanu Peleti Palepoi Mauga won in yesterday’s general election, according to unofficial results from the Election Office following yesterday’s general election. And based on these results, there is no run off election, as predicted by some Lolo and Lemanu supporters earlier yesterday morning who claimed that it would be a “landslide” election for the incumbent.

Samoa News was unable to confirm by press time whether this is the first time in a gubernatorial race that the election for governor and lieutenant governor didn’t go into a run off, since American Samoa started electing its governor in 1977.

Local law states that a special or run off election, is held two weeks after the general election if none of the candidates received 50 percent plus one vote. The special election is between the two candidates with the highest number of votes.

In this case, the incumbent team received much more. According to the unofficial results, of the total 12,024 ballots counted in the general election Lolo/Lemanu received 7,235 (60.2%); while challengers Faoa Aitofele Sunia and Rep. Larry S. Sanitoa received 4,305 votes (35.8%); and Tuika Tuika and Salanoa Iuni Maeva Saveena got 484 votes (4.0%), according to the unofficial results released last night by the Election Office. There is a three-day waiting period before the chief election officer certifies the results as official.

Even before the unofficial results were announced on KVZK-TV, the candidates were already aware of the outcome of the election by 9p.m yesterday (last night).

Speaking to a large crowd at the Fano Guest House in Fagaalu, following a prayer service, Lolo says there are no words to describe days like yesterday - Election Day. He points out that the main goal is to develop the government and gave thanks to the public for their prayers that the election had completed peacefully.

He congratulated the challenges saying that without the challengers, the community wouldn’t know more as to where the government stands. And after the election American Samoa returns to its usual practice of living peacefully, Lolo said in his remarks which were all delivered in Samoan.

The governor then called on the challengers to come together, now that the election is over, to lead the government forward.

They thanked the committee for their hard work and noted that the government will only succeed if its led with love and humility.

He said he and Lemanu had made many mistakes in the past and at times they don’t know about the mistakes. However, of most importance is that the mistakes and errors made will result in fresh and new ideas to lead the government into the future; he said and called for another territory-wide campaign committee gathering on Thursday. At the end of the gathering, was the traditional siva taualuga.

“God has answered, it’s not us, but it’s God’s will and the people through their vote that Lolo and Lemanu will lead the government another four years,” Faoa told his supporters at the Savea guest house in Matu’u and Faganeanea.

Savea Tavita Loseti spoke first telling supporters to remain calm, to not be so down and for them to be strong and head forward.

He also took the opportunity to tell how he and Sanitoa came about running for office. According to Faoa and Larry, they had many people approach them to run for office and then they met and decided to announce their candidacy. Faoa reminded his supporters of their Sunday sermon and said that during the 2012 election, he and Taufete’e lost by 700-plus votes (during the run off election with Lolo/Lemanu team) but this election the difference is 3,000 votes and that goes to show that God has chosen Lolo and Lemanu to lead this government.

“It’s clear that God sees that this is not our time in office, we can’t seek God for his blessing and when the result is not in our favor, we turn away from God. God has answered, it’s not us, but its God’s will and the people through their vote that Lolo and Lemanu will lead the government another four years,” said Faoa. He mentioned that they won at three polling stations - Lauli’i, Utulei and Fagatogo.

According to Faoa, they were impressed with the results from Pago Pago as they did not anticipate they would have that many supporters. He said the Pago Pago Committee is one of the strongest and he thanked them for their commitment.

In his remarks, Sanitoa congratulated Lolo and Lemanu for winning another four years. He thanked all their supporters for their hard work and their commitment to the cause.