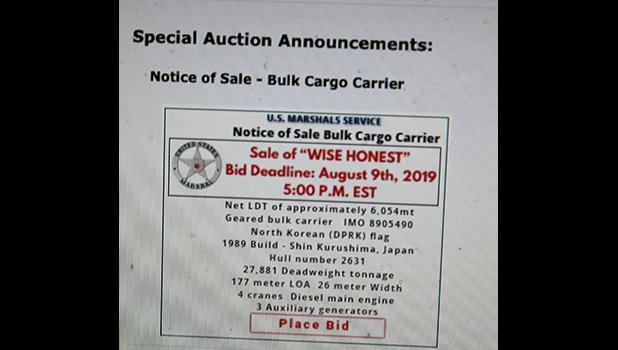 Pago Pago, AMERICAN SAMOA — A screenshot last Friday morning, of the US Marshal Service (USMS) website, showing a link where bidders were to submit bids for the sale of the North Korean cargo vessel, “Wise Honest”, currently anchored in the bay area of American Samoa.

Bid submission closed last Friday at 5p.m. (Eastern Standard Time, or 11a.m. American Samoa time.) No public information was available as of yesterday morning on how many bids were received by the USMS, which is overseeing the sale.

A two-page notice of the vessel’s sale states that the Wise Honest “is presently located at port anchorage in Pago, Pago, American Samoa” and the vessel will be sold, “as is, where is.”

Additionally, the federal government makes no representation, warranty, statement, guaranty, promise, or commitment as to the quality or seaworthiness of the Wise Honest, and the vessel is not in condition to be moved except by tow.

“Only bids from potential purchasers which have experience, qualifications, and capabilities suitable to take delivery and arrange to remove the vessel from its current location shall be considered,” said the notice.

The Wise Honest was towed to Pago Pago earlier this year in May, after it was seized by the US government a month earlier in Indonesia.

Based on a ruling last month by the federal court in New York City, the vessel was put up for sale as a result of a $5 million claim by Cynthia and Frederick Warmbier —  the parents of Otto Warmbier — a college student from Cincinnati, OH who was sentenced by North Korea to 15 years of hard labor in early 2016 for allegedly stealing a propaganda poster.

The Warmbiers told news media at the time that their son was tortured, and he died days after being returned in a vegetative state to the U.S. in June 2017.