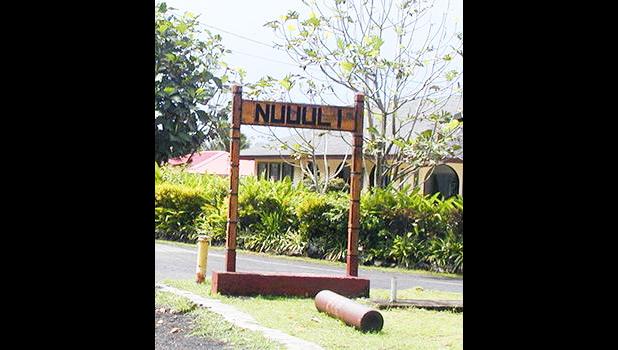 Pago Pago, AMERICAN SAMOA — With the political campaign season in full swing as the Nov. 3rd general election quickly approaches, the Nu’uuli Village Council has already implemented, and enforced its long standing village rule banning any political campaign billboards from being erected at the main village center — or aai — which is the area heading into Coconut Point at Nu’uuli.

“Even our own sons and daughters of Nu’uuli running for public office are included in this Village Council rule, without exception,” said Nu’uuli village council traditional leader chief Soliai Tuipine Fuimaono during a Samoa News interview early this week.

“Campaign billboards and large signage can be put-up along the main road, but not in the aai,” said Soliai, who explained that this village rule was implemented more than two-decades ago following an incident where firearms was discharged in the village center.

He said the incident was “very serious” at the time, during the gubernatorial race, when members of two gubernatorial teams from within the village had their differences and campaign signs were burned or destroyed, and arguments erupted with guns fired off. Both sides challenged each other with warrior calls, or fa’aumuumu —  and more firearms discharged.

“To keep and maintain peace within the village, and prevent a repeat of this incident, the Village Council implemented the rule in which all campaign signage and billboards are banned from the aai,” he said and noted that another village council rule bans the discharge of firearms inside the village. “Safety and well-being of everyone is important.”

He said that there are certain major Samoan traditions in which firearms are discharged, but this is banned in Nu’uuli under village council rules.

Soliai also shared another village rule — so that the public is fully aware — that swimming in the ocean is banned on Sunday within the village boundary shoreline and this includes the popular shoreline of Coconut Point, which is popular with visitors and those from other villages.

He said village residents are fully aware of this ban. “It’s appropriate that this rule applies to both residents of Nu’uuli and visitors to the village,” he said. “Sunday is God’s day and should be respected.”

Nu’uuli is one of the four villages that received $10,000 from the ASG Coronavirus Operation Fund to assist police with the enforcement of the governor’s COVID-19 declaration restrictions. Soliai confirmed that the ‘aumaga continues this task and had already established a second “fale leoleo” or guard-shack — at the boundary with Malaeimi village.

The main ‘fale leoleo’ is next to the CBT store in Nu’uuli and the village council is working on a third fale leoleo in the area next to the old Hong Kong restaurant.