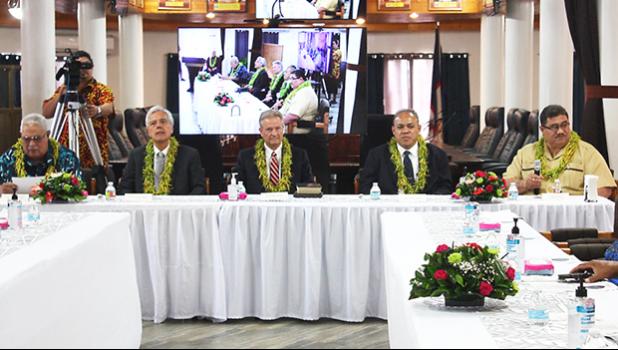 Tuaolo had called the gathering for the presentation of a Senate Concurrent Resolution to Nattress on behalf of The Church for the significant contributions that the Church has donated to American Samoa.

In The Church’s news release regarding the meeting with lawmakers, Nattress expressed gratitude and love to the leaders and all the people of American Samoa for their efforts to raise strong families, love God and their fellow brothers and sisters, and to be and to do good in their homes and communities.

“The Savior taught the people to serve one another,” Elder Nattress said. Online link to details of the news release at:

In the resolution, it commends and congratulates The Church on the recent ground breaking of the American Samoa Temple. And acknowledges the presence of Nattress, who presided over the ceremony. The Legislature also offered sincere gratitude of the territory for all of The Church’s generous humanitarian efforts for the people of American Samoa.

Ground breaking for the 17,000 square-foot, single-story Temple was held Oct. 30th and the project will include housing for the Temple president, matron and Temple missionaries as well as a distribution center.

The non-binding resolution notes that The Church has played a large role in American Samoa through its numerous humanitarian efforts regardless of race, religious affiliations, and private and public organizations. And the territory is indebted to The Church for the many blessings it bestows upon the territory year after year.

The resolution explained that The Church is credited for its great investments made in LBJ Medical Center having contributed immensely over the years. For example, in 2013, The Church presented a digital mammography and biopsy machine to the hospital. In 2019, “members of a dynamic team serving as welfare and self-reliance missionaries” were called to the territory to train and provide support for LBJ’s medical professionals.

Elder Dr. John Dr. John Edwards and his wife Becky, Elder Dr. Greg Patch and his wife Janene and Elder Dr. Robert Keddington were on assignment to LBJ for 18 months. Elder Dr. Edwards, worked specially to set up the first ever knee replacement clinic in the territory and performed over 100 successful surgeries.

During recent natural disasters The Church opened its doors to families across the territory that were temporarily displaced, according to the resolution, which also says that The Church’s Relief Society women’s organization has over many occasions supplied clothing, blankets, and pillows to families in need.

Furthermore, The Church through the “LDS Charities” made a contribution of $25,000 to the Pala Lagoon swimming pool center. They have also donated commercial washing machines and vital signs machines to Hope House and also donated paint to various schools on island and continue to perform community service through efforts to clean up Lion’s park.

Recently, the resolution states, The Church has given back a crucial part of American Samoa’s history and culture. Dr. Kalilimoku Hunt, on behalf of the Church presented to Gov. Lemanu Peleti Mauga, digital copies of records that date from 1900 to 1974 that were copied from microfilm — which were damaged and could only be saved by digitization to a computer format. These are records of valuable history that would have been permanently lost were it not for this work by the Church.

The Church “is a deep-rooted institution of American Samoa that cares genuinely for people and portrays it through all of its philanthropic deeds,” the resolution states.