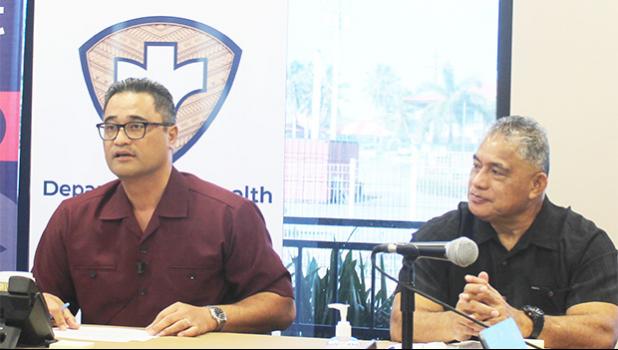 Talauega, accompanied by senior members of the COVID-19 Task Force, health officials and other officials, told reporters that the individual who tested positive was fully vaccinated prior to traveling to the US and has been placed in isolation.

Talauega, who is also the task force chairman, said all those locally, including ASG personnel who came in contact with the traveler upon arrival in the territory have been placed in quarantine has well.

According to the chairman, the traveler tested negative on all three required tests prior to boarding the flight to American Samoa. To protect the traveler’s privacy, as well as in accordance with federal law, Talauega didn’t reveal the identity of the traveler or even gender or age.

As the news conference ended, Talauega reiterated the privacy of the infected traveler and suggested that reporters not seek out to identify the traveler.

DoH information shared at the news conference, shows that the traveler “was immediately moved to isolation” at the DoH Alternate Care Facility 2 Building in Tafuna, where the person will be in isolation for 14-days; monitored for symptoms; and if symptoms arise, protocols are in place.

DOH also says that the traveler was asymptomatic when tested and will continue to be monitored. This individual is fully vaccinated and preliminary findings by DoH indicate this is not a historical positive case.

DoH said the rest of the travelers would continue quarantine following established protocols.

During the news conference, Health Department’s epidemiologist Dr. Aifili Tufa said the contact-tracing process have already begun to identify all individuals including travelers who came in contact with the passenger who tested positive.

“It’s very hard for us to pinpoint where” the traveler contract the virus including in the US, but DoH has protocols in place for contact-tracing, said Dr. Tufa.

Prior to the news conference, Talauega and the task force held a virtual meeting with Gov. Lemanu Peleti Palepoi Sialega Mauga, who was among the passengers on the Sept. 13th flight and is currently in quarantine.

In a news release distributed to reporters, DoH confirmed the one-positive case after results of the first COVID-19 tests were returned last night (Thursday evening). It says that the 10-day quarantine requirement upon arrival has allowed the medical team to continue to closely monitor travelers and minimize the risk of community transmission.

Even before the news conference this morning, social media was busy with postings about the confirmed case.

Samoa News will continue to update this story through the weekend with any new information and a full story in Monday’s print edition as well.