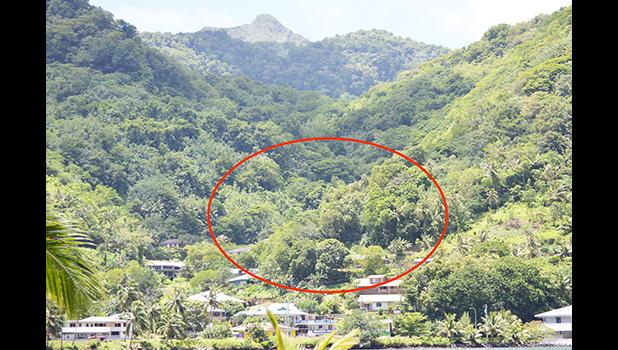 Pago Pago, AMERICAN SAMOA — A move to built a new prison on the Mageo communal land in Pago Pago at the mountain top area called Autapini/ Happy Valley area has shocked many members of the Mageo family.

Some members of the family are preparing to circulate a petition to gather signatures from Mageo family members and Pago Pago residents opposed to any plans to have a prison constructed at the Happy Valley area in Pago Pago.

Some senior members of the family — including matai of the Pago Pago village council spoke to Samoa News and stated that they’re strongly opposed to the plan for the new prison to be built on the family’s communal land.

One Mageo family member told Samoa News that the issue was never discussed nor brought to the family’s attention.

“As a result of our objection, we are putting a petition together to have Mageo family and people of Pago Pago sign that they are against any plans to have a prison constructed in the Pago Pago Happy Valley area,” the family member told Samoa News.

“My understanding there was no discussion ever with the Mageo clan about having a prison constructed on the Mageo communal land and if there is a need for such project, the issue must be brought to the family’s attention to discuss.”

Another senior member of the Mageo family also voiced concerns regarding the construction of the new prison.

The family member said that, “I sincerely believe that our community has the right to know where this prison is proposed to be located and that our Pago Pago community should have a say.”

The family member also believes that people of American Samoa must also be informed on what is going on and how this proposal will impact the lives of everyone — especially the Pago Pago community.

“Up until now, our Mageo family Sa’o hasn’t brought this issue to our “aiga potopoto” for discussion and most of us (family members) were shocked about the plan,” a family member said.

“Our plan is to be quick and let this petition out as soon as possible so that our family and the Pago Pago community can sign before it is handed over to the Government.”

Another family member shared the same thought. According to this family member, despite the high wall at the Territorial Correctional Facility (TCF) in Tafuna, inmates continue to escape from confinement.

“I read in the newspaper almost everyday news about inmates convicted by the court escaping from confinement while serving sentences and some of these inmates when they escaped from confinement they committed other serious crimes, which affected lives of people living around the area. I don’t want our Mageo family — and especially the Pago Pago community faced with the same problem,” the family member said.

Members of the Pago Pago community also shared their thoughts about the issue.

According to one elderly man, this area is a residential area with lots of families residing from the beginning of this access road all the way to the top. Also, there is individually owned lands that are on the access road and many family lands that do not belong to the Mageo family that will be encroached by the project.

The man is calling out to the Governor and ASG to please reconsider their decision because this will have a huge negative impact on the people that live in the area as well as the Pago Pago community at large.

Another man living in the area told Samoa News yesterday morning that they have observed trucks going up and down the road.

Samoa News understand that discussions have been ongoing for sometime among ASG government agencies about where to relocate the current correctional facility due to plans to build a new hospital at the Tafuna location where the prison is currently located.