Over 400 overseas absentee voters have already cast their ballots 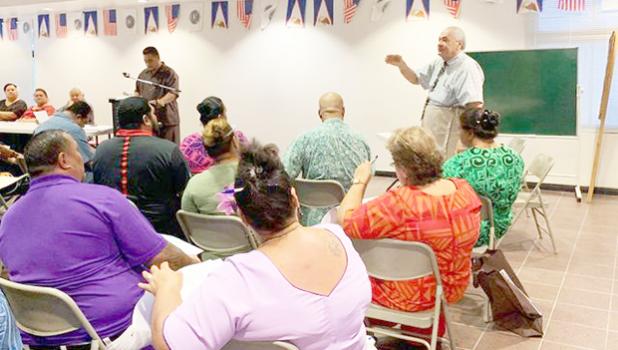 Pago Pago, AMERICAN SAMOA — Just over 400 overseas absentee ballots — including American Samoa residents stranded in the U.S due to border closer — have cast their ballots, as the Election Office has officially designated 41-polling stations territory wide for the Nov. 3, 2020 general election.

Meanwhile the Election Office has called for an open meeting of Swans island residents to select its non-voting delegate to the local House of Representatives. The seat is currently held by Rep. Su’a Alexander Eli Jennings.

As of Oct. 21, a total of 419 outside — or overseas — absentee ballots have been received by the Election Office, with the highest number of them — a total of 314 — under the new category of COVID-19, or American Samoa active voters stranded off island due to border closure.

The close of business on Oct. 19th was the deadline to submit requests for overseas absentee ballots.

For local absentee voting, a total of 144 have been cast as of Oct. 21st with 22 local absentee ballots for qualified electors traveling off island - which is for medical reasons -  and 122 from voters with disabilities.

Poll workers and election officials will be casting their local absentee ballots soon — this will be done before Election Day.

Chief Election Office Dr. Lealofi Uiagalelei issued an Oct. 21st notice to “Eligible voters of Swains Island” that a “special meeting will be held at the Election Office in Tafuna, next week Tuesday, Oct. 27th at 4:30p.m to select their delegate to the local House.

“Please attend this very important meeting,” said Uiagalelei, who, along with his staff, will play the observer role, while Swains islanders conduct the meeting themselves.

According to the Constitution, adult permanent residents of Swains Island who are U.S. nationals may elect at an open meeting a delegate to the House of Representatives who shall have all the privileges of a member of the House except the right to vote.

Uiagalelei told Samoa News that supervisors — or team leaders — and poll workers for the Election Office underwent training throughout this week in preparations for election day.

Furthermore, village pulenuu and district officials were also trained and informed of their duties on Election Day, he said.

On Wednesday this week, Uiagalelei certified and approved “for safety and health in response to COVID-19” the 41-polling stations, which will open from 12 hours from 6a.m on election day.

A majority of the polling stations are at church halls. For Manu’a voters residing on Tutuila, the Gov. H. Rex Lee Auditorium has been designated for them to cast ballots.

Complete list of polling stations is published elsewhere in today’s Samoa News edition in the spirit of community service.

We urge all voters TO VOTE on Election Day.