Pacific Horizons says farewell to 8, ready to take their "next steps" 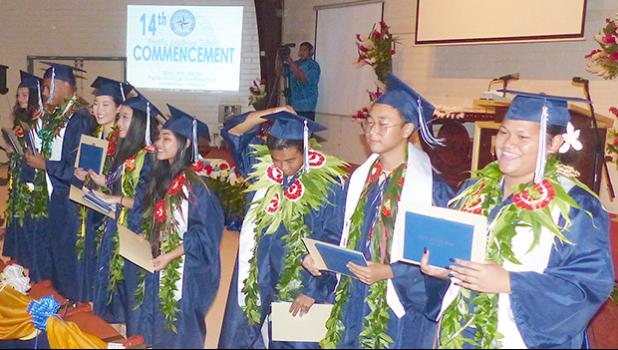 Pago Pago, AMERICAN SAMOA — The 14th Annual Commencement program for Pacific Horizons School was held at the Fatu o Aiga auditorium this past Tuesday evening, where 8 seniors received their diplomas in the presence of family members and friends.

Paramount Builders, a local company, prides itself in promoting education and honoring the achievements of the territory’s youth with this year’s sponsorship of graduation coverage.

This year, Meida Lin and Gloria Park shared the valedictorian title, while Alia Tuiolosega was salutatorian.

Uta Dr. Tagoilelagi and Faatigafua Fuatagavi were present for the Congressional recognition of the graduates, and Fofo Senator Faiivae Iuli Alex Godinet was the representative for the AS scholarship board.

In their speech, co-valedictorian Lin recalled how it was "hard and confusing" for her, when she entered PHS as a 4th grader. She said that at the time, she only knew the 26 letters of the alphabet, some numbers, and simple vocabulary.

(Lin is a true success story, in that she is the first person in her family to graduate from high school, and the first to go to college)

She said when people would talk to her, she'd try to figure out what they were saying based on their expressions and emotions. Fast forward 8 years later and Lin's perseverance and the friendships she made at the Home of the Navigators allowed for everything to fall into place.

Co-valedictorian Park, in her remarks, had one simple message for her fellow graduates: "In any situation, find your light and strive to shine. There are many times when your surroundings will blind you and even aim to discourage you from your pursuits. As long as you are genuine and passionate, your fire will kindle the lights of others. If there is one thing I regret, it would be not living in the moment. Cherish your time here on this tiny wet rock and remember that God has a plan for you, like He has for me."

Congratulations Navigators! You did it.

Wenhao Hou — Southern Oregon University, major: computer science — (He is the first in his family to graduate from high school and the first to go to college)

ASCC, towards a degree in animation or graphic design — (He is the first in his family to graduate from high school and the first to go to college)

University of Indiana Bloomington, major: marketing — (She is the first in her family to graduate from high school and the first to go to college)