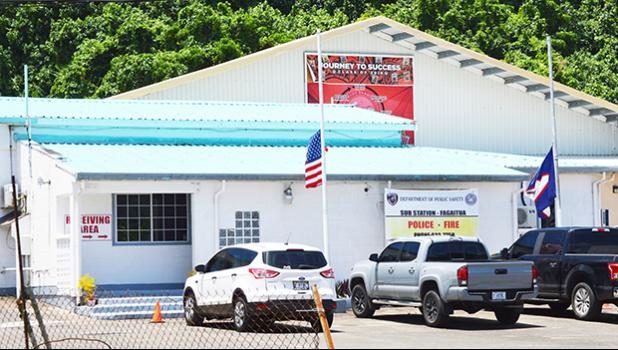 Pago Pago, AMERICAN SAMOA — Police Commissioner Lefiti Aitulagi F. Pese is taking calls from Eastern District leaders to upgrade the services for their constituents very seriously and he’s responding to the needs of the people.

In an interview with Samoa News last week, Lefiti confirmed that the Department of Public Safety (DPS) is doing everything in its power to make sure the safety of everyone in the eastern district is given priority.

“We’re responding to the request to place police officers at the wharf in Auasi to monitor alia transportation everyday from the Aunuu island to Auasi. We’re also adding more police officers to the Fagaitua Police Substation (FPS) to make sure each shift will have enough personnel to do the work,” Commissioner Lefiti told Samoa News.

According to Lefiti, DPS senior officials under the leadership of the Deputy Police Commissioner Foifua Foifua and the Marine Patrol leader, visited the wharf in Auasi to make an assessment on what is needed for them to do in order to assist the people of Aunu’u island.

The visit according to the Police Commissioner, included a plan to locate a piece of land that can be use to build an office to house police officers stationed at the Auasi wharf. The Commissioner said they’re looking for a good location and hope someone would be willing to assist with the need and offer a piece of land so that the government can lease it for this essential purpose.

Lefiti said he agrees that police need to be stationed at the wharf to monitor the daily transportation from Aunu’u to Auasi.

“This is a very dangerous zone for transportation especially when the weather is rough and that’s why I fully support the idea of having a few police officers stationed at the wharf everyday,” Lefiti said.

Lefiti said that there have been people who lost their lives between Auasi and Aunu’u due to rough sea and one of the roles of the officers would be to monitor the weather and to give out the order to stop transportation when the sea is rough.

“We don’t want to continue this problem into the future. Families lost their love ones and we need to act now to put a good plan in place to avoid future incidents,” Lefiti said.

For the issue of upgrading DPS service at the Fagaitua Police Substation (FPS), Lefiti confirmed that 19 police officers are now assigned to work at the FPS for three shifts, 24 hours, 7 days a week.

Lefiti stated that before he made his first personnel changes for the department, he sought advise from Major Pouu’amea Tuaolo-Supapo on what is needed to do in order for DPS to upgrade its service for the eastern district. Tuaolo-Supapo led the FPS for many months before she was appointed to be the new Chief of Police two weeks ago.

Lefiti said he adopted the recommendations of the new Chief of Police and decided to assign police officers residing in the eastern district to work at the FPS.

“The advantage of assigning police officers from the eastern district to work at the FPS is that, not only are they familiar with people, the location and villages, but they also familiar with the different areas and how to respond when something happens,” Lefiti said.

Lefiti said that one of the changes he made is to appoint Captain Polofa’asoa Pese to command the FPS for the time being. The problems remaining for FPS right now are that they only have one police unit, no fire truck and no ambulance.

Lefiti said a request has already been sent to ASG for assistance with the eastern district needs.

The issue of having police officers stationed at the wharf and placing more police officers, a fire truck and an ambulance at the Fagaitua Police Substation (FPS) were raised by the Saole Faipule Titiali’i Kitara Vaiau and Vaifanuatele Faipule Lavea Fatulegaee Mauga last month during the confirmation hearing of the Police Commissioner before the House Public Safety Committee.

Titiali’i told Lefiti that the presence of police officers including a DPS Marine Patrol boat at the Auasi wharf everyday is something that the American Samoa Government needs to consider.

Rep. Lavea also pointed out the importance of a fire truck and enough police units at the Fagaitua Police Substation (FPS) for the Eastern district.

He further stated that if a house is on fire, by the time a fire truck from the Fagatogo main station arrives the house is already gone.

“A lot of people from Aunu’u have lost their lives in the sea due to the lack of DPS Marine Patrol services in Aunu’u. I understand that funding is the main problem but let’s keep in mind that prevention is better than a cure,” Titiali’i said.

A viable health center is another Eastside problem, as the facility is currently under renovation’ or construction. According to a resident of Alao, a retired teacher of over 41 years of service, people residing on the Eastside need the Amouli Health Center in times of emergency.