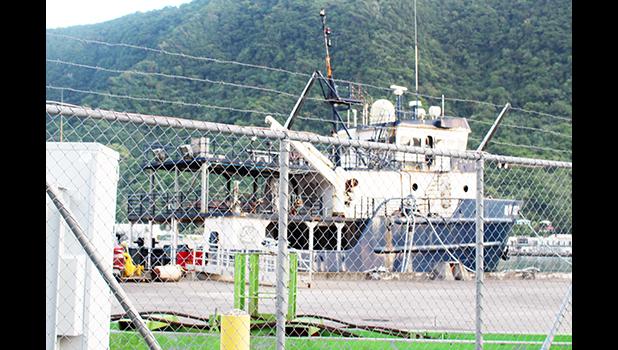 Only $50,000 set for maintenance of ASG vessels in new budget
By
Fili Sagapolutele
fili@samoanews.com

Pago Pago, AMERICAN SAMOA — The government vessel MV Sili is no longer operational, and it will be costly to repair — close to $4 million in order to be US Coast Guard certified, says Port Administration director Christopher King, when asked during his department’s fiscal year 2022 budget hearing on Monday this week.

ASG acquired the MV Sili several years ago and the vessel has not been seen out in the ocean for a long time, prompting Rep. Su’a Alexander Eli Jennings to question King — during the Fono Joint Budget Committee hearing — on the status and an update.

King responded that the vessel have been transferred to the Shipyard, “per ASG instructions.”

“As far as use of the vessel for Port Administration,” King told the committee that, “it’s beyond its usefulness at this time because of the repairs that needed to be done. Basically, it’s going to cost us too much money to put it back to a Coast Guard inspected vessel.”

Sen. Togiola T.A. Tulafono acknowledged the transfer of the vessel to the shipyard, based on written documents by the governor. However, he said the problem is, the vessel is still anchored at port and not at the shipyard.

He then asked if it’s true that many parts of the MV Sili — such as generators, avionics and so forth, were removed by Port Administration. King responded, “yes” saying that Port needed these parts for use for other ASG vessel’ needs.

Based on King’s response, Togiola asked, “So, there is no use at all for this vessel, except as scrap metal?” and the Port Administration director answered, “yes.”

Sen. Malaepule Saite Moliga noted that Port Administration’s budget shows only $50,000 allocated for maintenance of government vessels. He said this is an insufficient amount because it’s costly to carry out maintenance. He asked that King review this important issue.

Besides the MV Sili, other ASG vessels are the MV Manu’atele, the Segaula, Uila-ole-Sami and the two Port tugboats.

In a vessel-related expenditure, under the Special Program budget overseen by the Governor’s Office, a total of $500,000 is allocated for “Manu’a and Swains transportation”. The budget item description explains that these funds will help pay fuel costs for the voyages of ASG vessels — MV Sili, MV Manu’atele and the MV Segaula — between Tutuila and the Manu’a islands.

Also, it will be used to defray any other pertinent costs associated with trips to Manu’a, including any trips to Swains Island.

It’s been more than a year since the groundbreaking ceremony was held May 7 last year for the Malaloa Wharf Extension Project, and several lawmakers and those in the fishing industry have wondered when the construction phase will actually begin.

Sen. Magalei Logovi’i asked King about the status of this project. “At this point we’re just waiting for the US Army Corps of Engineer approval of the environmental process, that it has to go through,” was King’s response.

Asked if “there’s any money left” for this project, King’s direct answer was, “yes.”

Silva Group is the contractor for the project, which would extend the current dock at the Malaloa Marina for the American Samoa longline fleet.